Bullock family in Kodiak for 1964 earthquake 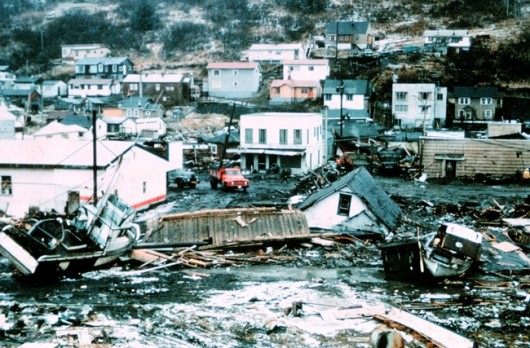 Fifty years ago, a magnitude 9.2 earthquake hit in Alaska’s Prince William Sound. It was the largest recorded earthquake ever in North America, lasted about 4 minutes, and caused a massive tsunami and tidal surges.

Susan Bullock, now Susan Stone, was just 9 years old when the earthquake hit. She lived in Kodiak with the rest of the Bullock family. They’d moved there two years earlier when her father, the Rev. Don Bullock, became the community’s Episcopal minister. Stone is a teacher who lives in Ketchikan now, as does her mother, Evelyn Bullock. They sat down with KRBD to reminisce about the earthquake, and how it affected Kodiak.

At 5:30 p.m. March 27th, 1964, Evelyn Bullock was making dinner when she felt her small house shaking. At first, she thought it was her sons, wrestling again in their room. But then it got worse, much worse.

Here is her daughter, Susan Stone, who read an excerpt from an article Bullock wrote soon after the Good Friday Earthquake: “I stooped to pick up 18-month-old Geoffrey and could hardly straighten up. I told the children to come by the front door. I sat down on a chair by the door with Geoffrey on my lap and my arm around 4 ½-year-old Jennifer. My first thought was to go outside until I looked out and saw swaying power lines in front of our house. I remembered reading somewhere that the safest place in a house was under a door jam, so we stayed where we were. A week earlier, I had mentioned to my husband… that I wished Bob were a little more enthusiastic about attending both services on Sunday. Now it was Bob who said, ‘Mother, pray out loud.’” 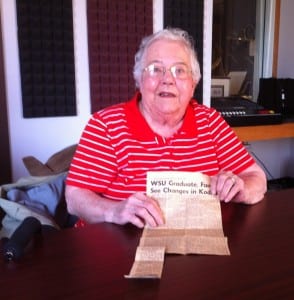 Evelyn Bullock displays a clipping from the 1964 article she wrote shortly after the Good Friday Earthquake.

You see, before Evelyn Bullock’s Alaska adventure, she had been a journalism student at Washington State University. Some of her fellow students, who had since become professional reporters, tracked her down after the earthquake.

“I don’t remember how they got through to us, because we didn’t have any phones, but they did and asked me to write a story,” she recalled.

Bullock’s article was published in the Spokane Daily Chronicle on April 16, 1964, just a couple weeks after the devastating event. Stone continued reading from the delicate, yellowed, 50-year-old clipping: “The house was shaking and rattling so vigorously, I hoped my voice would remain calm. The bookcase in the hall was about to tip when the earthquake gradually subsided.”

For coastal communities, a big earthquake is just the start of a big problem. The Bullock family knew that, so when the shaking calmed down, they joined a stream of vehicles headed for high ground.

“There was a huge line going up Pillar Mountain, we moved along past a water tower that was spewing water from a crack near the top,” Stone read out loud. “It was clear and cold, about 25 degrees. We went about a mile up the mountain before the line stopped. We wrapped the younger children in blankets and settled down to wait.”

While they waited, Stone recalled, a man with a shortwave radio decided to announce that Kodiak was sinking into the sea.

When the tidal surge hit, about an hour and a half after the earthquake, Stone remembers 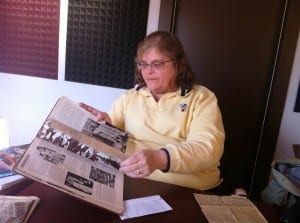 Susan Stone looks through a collection of old newspaper articles while reminiscing about the 1964 Good Friday Earthquake.

that nearby Woody Island, where she attended a church camp, quickly disappeared from view. The town was dark, but they could see lights from some of the boats, bobbing in the waves.

While many of the residents were safe on the mountain, others didn’t understand that the earthquake was a precursor.

“The band teacher and his whole family were out clam digging on a beach,” Stone said. “I think he was from Nebraska, and people from Middle America don’t understand about tsunamis, and didn’t make the connection. They didn’t know to go to higher ground. I don’t think they ever found the bodies.”

Stone and her mother recalled the devastation in downtown Kodiak.

“That’s one of the things I remember, was driving downtown the first time,” Stone said. “First of all there was the main road through town and there was a house right in the middle of it. I tell my kids at school, it looks like someone just scooped up the whole town of Kodiak, dumped it back down and poured it full of mud.”

Boats, too, were left in the middle of town, while others were dragged far out to sea. Bullock says an Alaska Communications System operator worked diligently to reach all the boats known to have been in the area. One boat, the Selief, is well known for where it ended up.

“That operator on ACS got a national award because she stood by the microphone for two days solid,” Bullock recalled. “And then she said, ‘The Selief: Are you there?’ ‘Yeah, if you look out your window, we’re right in the yard of the school.’”

Aftershocks rocked the town for weeks after the initial earthquake, and Bullock remembers sleeping with a transistor radio turned on under her pillow, to help mask the rumbling noises. Some people fled, too afraid to stay on an island after such a tragedy, but the Bullock family stayed.

“You know, you just kind of dug in and dealt with it,” Stone said.

And a big part of dealing with it was rebuilding.

“Everything was downtown,” Stone said. “We lost our movie theater, the grocery store, the dry goods store, the bars. You can guess what came back first: The bars.”

One building that didn’t need replacement was the Episcopal Church. It was uphill, and survived the earthquake and resulting tide. A large, heavy oak cross had been hung there just that morning. Stone read from another old newspaper story that tells how her father had been skeptical that the carpenter’s choice of hooks would hold the cross in place.

“And then the story closes: ‘The great convulsion had permanently reshaped the Earth in many places. In uninhabited Montague Island, near the earthquake’s epicenter in Prince William Sound, it had raised the land as much as 33 feet. Under the devastated harbors of Seward and Valdez, it had lowered the ocean floor by as much as 150 feet. It had shaken, cut, dropped, heaved and twisted the earth many places, but in the little church overlooking Kodiak harbor, it had failed to shake loose Father Bullock’s new cross.’”

There’s much more to the story. Listen to KRBD’s full interview with Susan Stone and Evelyn Bullock, posted below.