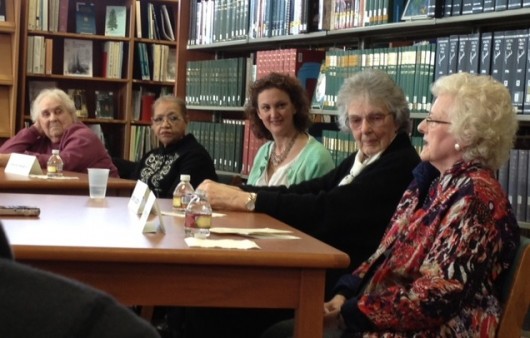 Last week, in celebration of Women’s History Month, the University of Alaska Southeast Ketchikan Campus Library hosted a panel of women who moved to Ketchikan in the 1950s. They talked about how they arrived, what life was like at that time, the different jobs they held and the social scene.

On the panel were Cathy Bellon, Ernestine Henderson, Elinore Jacobsen and Alaire Stanton. A packed audience filled the university library for the talk, and some in the audience joined the conversation.

Bellon said she moved here in 1955. Her husband was a city police officer, and had a habit of buying boats. The two also worked in the commercial fishing industry, and later owned one of Ketchikan now historic bars.

“He said stick with me and we’ll go places,” she said. “I never dreamed it would be the Potlatch Bar.”

Henderson, a retired clerk of court, officiated at countless weddings over the years. Her mother-in-law owned June’s Café, and her husband worked in construction. 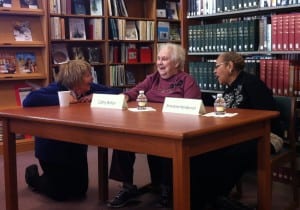 Lois Munch talks with Cathy Bellon and Ernestine Henderson before the panel discussion.

Henderson worked at “Mother June’s” restaurant for a while, then at the Stedman Hotel, owned by Gordon Zerbetz. This was back when many women didn’t work outside the home, and Henderson’s husband decided she shouldn’t either.

“So I gave Gordon Zerbetz about three months (worth of) two-weeks’ notice, and he would never hire anyone,” she said. “So finally I just didn’t show up for work. He didn’t want me to quit! I was enjoying it, but my husband said no, absolutely you can’t do that.”

Henderson got back into the job marker later, though, and worked many years for the state before retiring.

Elinore Jacobsen is a retired nurse, who worked at the old health center and hospital, which both were downtown. She also would fly out to remote communities to provide health care for people who couldn’t afford to come to Ketchikan.

“I would sort of screen the patients and get a general, and then categorize them,” she said. “That was really an interesting experience and something I think the State of Alaska did and should have done for those individuals who had no access to health care.”

Alaire Stanton is a former city mayor, City Council member and Pioneers Home director, among her other volunteer positions. She moved to Ketchikan in 1954. She was 18, recently married and her husband had just been hired at the brand-new pulp mill. She also was pregnant.

“During the first summer, there was hardly any movement back and forth between the West End and downtown because they were reconstructing Water Street,” she said. “When I had to go to the doctor for my appointments because I was pregnant, I had to walk from basically the Lutheran Church down to the MBA Building. And that was a very cumbersome 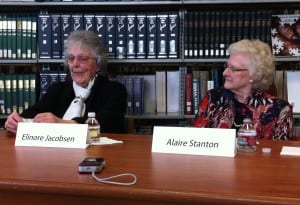 way to get downtown because often it was a couple planks alongside a building. It was a frontier experience that first summer.”

While not one of the panelists, Gerry Gnasiak is another 1950s arrival. She joined the conversation, and talked a little about the racial divide that she experienced here in the 50s.

“I was probably the only multi-racial person on the island when I arrived here,” she said. “There was a divide. And there never is a divide that’s pretty. It was pretty ugly in some cases.”

Henderson, who is African American, said she never noticed any racism in Ketchikan at that time. Stanton noted that there was another kind of division, centered on the pulp mill.

On a lighter note, the women recalled how they adjusted to life in Alaska’s First City. Henderson said she bought the equivalent of a rain jacket for the baby stroller, so she could walk with her kids in Ketchikan’s typical downpours.

Knasiak remembered a lesson in footwear that she immediately learned.

“I arrived in 3-inch heels, a suit, a hat and gloves,” she said. “That’s the way we did it. It was 1955, and the streets were planked, I got off and the first thing I did I caught my heel and pitched forward. Happily there was a guy in back of me and he caught my coat, or I would have been toothless.”

Listen to the full panel discussion below.