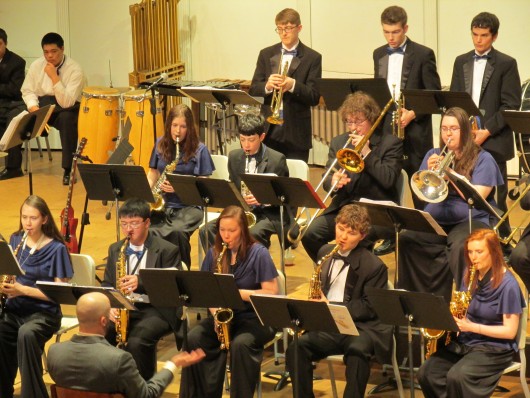 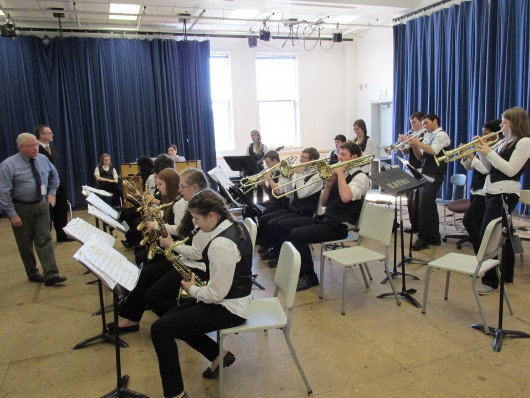 The Petersburg High School Jazz Band is critiqued by adjudicator Dick Elliot after their performance.

Around 500 young musicians from all over Southeast Alaska brought their instruments and voices to Ketchikan last weekend for the Region 5 Southeast Alaska Music Festival. It’s an event that rotates between Ketchikan, Juneau, and Sitka each year.

Music from dozens of choirs and bands echoed throughout the Kayhi hallways.

Kayhi Activities Director Ed Klein said there were around 600 students, including Kayhi’s 125, in Ketchikan for the festival.

Sitka music teacher John DePalatis has been teaching in Southeast Alaska for 8 years.

“What’s wonderful about Southeast is that our kids all know each other, they house together. So it’s a meeting of old friends,” DePalatis said. “And they get upset when they don’t get to hear each other perform and it’s what it should be about, which is kids making good music and supporting each other.”

Each day of the three-day festival starts with a series of short performances from choirs and bands. After performing, each group is critiqued by an adjudicator.

“Our whole idea is to support what the schools are doing, and to give feedback to the kids and directors so as they come away from this they are able to take what we have given them back to the schools and rehearsal situations,” said Dick Elliot, one of the four adjudicators.

Elliot is Associate Director of Bands at George Fox University in Oregon. He’s done a lot of adjudicating for high school bands, but he’s never been to Southeast Alaska before.

“I look at the size of their high school, 143 in their high school,” he said, referring to the Petersburg Jazz Band, which he had just critiqued. “And I think ‘Oh my gosh, they’re going to be lucky to have ten or eleven in their band.’ And then they come in with something like this that absolutely blows you away.”

One Kayhi student said hearing constructive criticism from the adjudicators gets through to her more than casual advice from friends or family.

Laslie Iputi, a vocalist in the Thunder Mountain Concert Choir, said an adjudicator’s advice made a big difference.

“He told us we need to blend our voices to become una voce, like one voice,” she said. “We took it and we used it last night and I think that’s why we came out good. When we started, I doubted our group…but after that performance I was really surprised with how it turned out.”

After the morning of performances and adjudicating, clinics are next. These are hour-long workshops focused on a specific topic.

Katie Gaggini and Kim Stone are music teachers in Ketchikan. On Saturday, they led a “Fun With Opera” clinic.

“What we really want to portray to kids is how, there’s a lot of elements to singing, but one that’s super important is emotion,” said Gaggini. “So today we’re going to be talking about all the elements of emotion and how it adds character to the piece.”

Each night of the festival wraps up in another series of choir, orchestra and band concerts.

Korbin Storms is a Mt. Edgecumbe student. She summed up her favorite part of the entire festival.

“The moment when you can tell that people are really into it and you get chills on the back of your neck.”

“I think being a music student brings a lot of joy to people,” said Sitka student Darian Scarbrough. “There’s something about it that makes people feel better inside.”

Next year’s music fest will be hosted in either Sitka or Juneau.