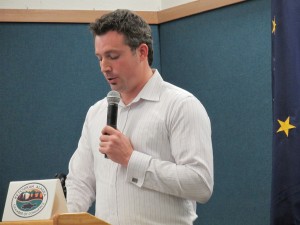 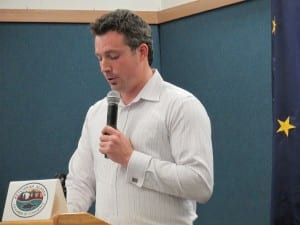 Representatives from the mining industry, regulatory agencies and local businesses touted the economic benefits of mining to Southeast Alaska during a Greater Ketchikan Chamber of Commerce luncheon today (Wednesday, April 23). Two Prince of Wales Island projects were the focus of the discussion – the Niblack copper, gold, silver and zinc prospect; and the Bokan-Dotson Ridge rare earth elements project.
Graham Neale of Heatherdale Resources is project manager for Niblack. Neale says Southeast Alaska is ideal for mine development.
“There’s a workforce that’s already ready. They want to go to work. A lot of the trades that already exist or existed in the past are easily transferrable to the mining industry. A lot of the service and support businesses that support industrial development and responsible mineral development already exist.”
Neale says Alaska ranks number one in the world for mineral potential according to a study done by the Fraser Institute, an independent research and educational organization based in Canada.
Deantha Crockett, Executive Director of the Alaska Miners Association says the need for minerals, especially rare earth elements, is only increasing.
“We’re all going to keep using our devices. We’re all going to keep driving our cars. So why is it important to mine? And then why is it important to do it here? We have an incredible permitting process. It’s very important it’s stringent, it’s rigorous, and it should be.”
Crockett shared results from an economic study on mining in Alaska completed by the McDowell Group.
“We have an average wage of $100,000 within our industry. That’s twice the state average income for any other industry. The local revenues that you’ll see in here are really staggering facts. It’s a really good way to tell what’s working, and what we need to keep doing.”
She says the Alaska Miners Association will do what it can to further development in Alaska. The AMA is an umbrella organization for the mining industry in the state. Crockett says a major role of AMA is to advocate for the industry and to speak to lawmakers about mining issues.
Representatives from Ucore (YOO-core), developer of the Bokan-Dotson project, are in Juneau speaking with legislators and were unable to attend the luncheon.
Several in attendance spoke in favor of Senate Bill 99. Amendments to the bill would give the Alaska Industrial Development and Export Authority (AIDEA) the ability to issue bonds for the Niblack and Bokan mining projects.
Heatherdale CEO Patrick Smith says even if SB99 is approved, it does not provide the mining industry any guarantees, but does allow AEIDA to provide funding more quickly.

“When we get to the point in time when we’re putting the financing package together – and these are large capital investments – it gives them the ability to go through their process, go to their board of directors and make and investment in the Niblack project. If it meets their due diligence.”
Smith says the prospects are excellent for Niblack.
“Few projects around the globe are as advanced as Niblack is that have the potential to be in production in a reasonable period of time. If you check the boxes for ‘being in Alaska,’ the regulatory environment, the legal environment, the fact that we have so much community support for this project. You just go down and look at all the positive attributes of this project, and you can see why several companies are looking very seriously at joining with us in a joint venture.”
Smith says Heatherdale Resources will work aggressively to move the Niblack project forward.
Local business owners and regulators also spoke during the well-attended presentation. Many were heading to Prince of Wales Island for a Mining Symposium in Craig. The symposium runs through Friday (April 25th).