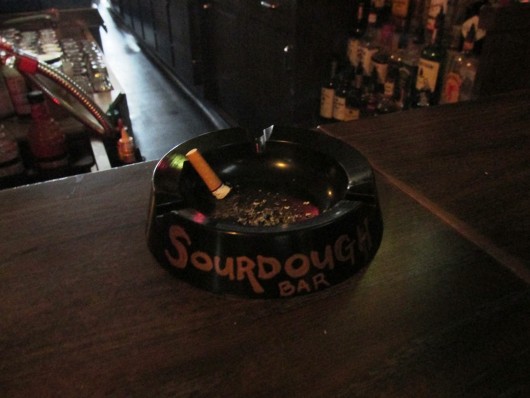 Starting Wednesday, May 1, smoking is banned at the popular Sourdough Bar in downtown Ketchikan. It’s a big deal for this established business, and while many people are happy at the switch, there are a few quiet grumbles

I visited the bar on the last day that smoking was allowed, to talk with some longtime patrons who gather weekly for what they like to call the “board meeting.”

Andrea Murphy is a bartender at the Sourdough. She’s also likes to attend the bar’s twice-weekly board meetings, which is a formal term for a group of regulars that for years has gathered on Sunday and Wednesday afternoons to check in, have a couple drinks and – for some of them – smoke.

Now, though, the smokers will have to take it outside. Because the 50s-era Sourdough Bar is officially smoke-free. The owners decided a couple of weeks ago to make the switch, saying that they expect a proposed statewide ban on workplace smoking to pass in the next year or two, and they wanted to get in ahead of the ban.

They were even giving away the ashtrays.

“We have a lot that we have no need for anymore, so the boss has informed me, ‘Hey, take one on the way out,’” Murphy said.

Murphy smokes, so she’ll have to go outside now if she wants a cigarette. But, as an employee, she knows she’ll benefit.

“We’re all thinking this is great,” she said. “We want to breathe.”

On the other hand, though, “I’m definitely on the fence. I’m pro because of the health issue. But also, when people come up here, it’s the last frontier. It’s a time warp. I do get tourists that are like ‘Oh my goodness! Where am I? This is great.’”

She said the reaction from customers has been mixed.

“I’ve heard some angry reactions. ‘Hey, this is Alaska. It’s the Last Frontier, we smoke, we 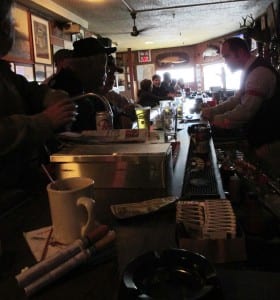 Others, though, told her they’ll start coming to the Sourdough now that smoking is no longer allowed.

Jim Van Horn is another board meeting regular, he was sitting at the bar smoking a thin cigar.

“I haven’t smoked in 30 years, but I’m having a memorial cigar for the Sourdough Bar,” he said. “I’m a cancer survivor from smoking, but as a gesture to the Sourdough Bar for standing up and going non-smoking, I’m behind them 100 percent.”

Van Horn added, though, that he doesn’t want the government to dictate smoking rules – he thinks it should be up to business owners.

A few barstools down was another Sourdough customer, a beer in front of her, along with a pack of smokes on the bar and a lit cigarette in the ashtray.

“Everybody calls me Punky,” she said, adding that she approves of the Sourdough Bar’s decision to go smoke free.

“It’s not going to bother me at all because I enjoy coming in here,” she said.

Everyone I talked to in the bar acknowledged that times are changing. And maybe that’s OK.

“The bar, it’s like the living room,” said Murphy. “You come out and talk to people, enjoy the conversation. And you don’t have to get black lung while doing it now.”