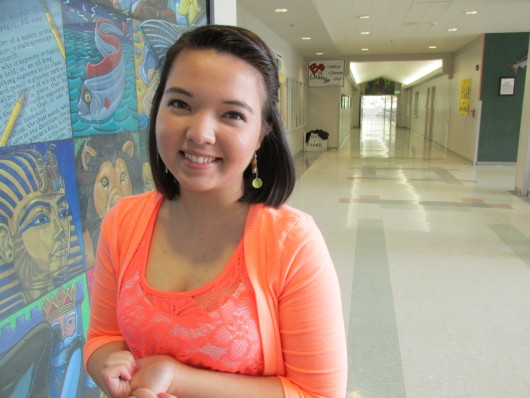 Martina May Brown won the Gates scholarship, which pays for up to 10 years of higher education.

For the first time in at least ten years, a Ketchikan high school student has won the prestigious Gates Millennium Scholarship. The scholarship pays full tuition for up to ten years of higher education. Kayhi’s Martina May Brown is one of 1,000 winners from around the US. She was chosen from more than 50,000 applicants.

Martina May Brown, who goes by “May,” has wanted to go to University of Portland for three years.

“I actually had no idea how I was gonna pay for University of Portland, but I did make a plan B in case that didn’t work out,” Brown said. “And that was to go to [University of Alaska] Fairbanks.”

Portland costs more than $50,000 a year to attend. Brown wanted to go there so badly that she applied for 60 different scholarships. The Gates Scholarship is probably the toughest one to get, because it pays for everything for your entire higher education career.

The Gates Program is also looking for students from ethnic minorities. There are a certain number of spots for Asian, African American, Native American, and Hispanic applicants. Those requirements are just the beginning of the application process. Applicants also have to answer seven in-depth, 1,000-word essays.

“The questions that dealt with my family, those were hard to answer,” Brown said. “Having to talk about family and all the things we went through…It was like looking back and thinking, ‘Wow, I can’t believe we went through all that.'”

Brown spent hours and hours last fall answering these questions and refining them over and over. She had help from McClory and a professional writer in Hawaii. There was one question that Brown struggled to answer.

“They wanted to know more about my culture and stuff and I didn’t really understand what that meant,” she said. “I asked my mom and she didn’t really have a good answer to that either. Culture? This is who we are. I just found that question very difficult.”

Brown’s mother is Filipino and her father is American. She grew up in the Philippines for the first seven years of her life. Brown struggled to write about parts of her background, which she didn’t want to talk about for this story. But her dedication to the application didn’t falter.

“I’ve never seen anybody work so aggressively and so committedly toward a scholarship application,” McClory said.

“Oh my God,” Brown recalls her reaction. “And then I just sat there and I was like wow. And tears just started coming out of my eyes. My parents were like, ‘May, what’s wrong?’ And then my mom was like, ‘My baby’s going to college!'”

It’s official. Brown is moving to Portland in the fall. She’ll study nursing there, and is thinking about eventually becoming a nurse practitioner or going into healthcare management. Her thoughts about the big move echo many other 17-year-olds’.

“I’m really excited to make my own decisions,” she said. “I’m not ready to grow up, but on the other hand I want to grow up,”

Brown is one of three Alaska students to win the Gates Scholarship this year. The other two are from Chevak, a town of about 800 in Western Alaska.