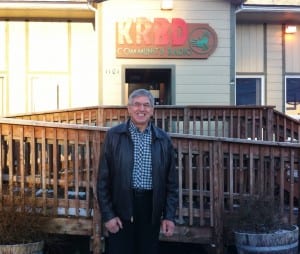 Byron Mallott poses at KRBD-FM in Ketchikan during a campaign visit. The candidate for governor says he will leave Sealaskas board of directors next month. (KRBD News)

Bryon Mallott will leave Sealaska’s board of directors next month to spend more time campaigning for governor.

He’s served on the Juneau-based regional Native corporation’s governing body – or been its CEO – since 1972.

Mallott, a Democrat, is all but assured to challenge Republican Gov. Sean Parnell in the November general election.

In a press release, he said he would complete his term, which ends at the corporation’s June 28th annual meeting. But he will not seek re-election to the board.

“I think it was good step that he took to, one, allow him to concentrate on the governor’s race and, two, open it up for shareholders so he didn’t just hold onto his seat and have to give it up after that if he got elected,” he said.

When Sealaska board incumbents leave, they often step down before the next election. The board then appoints a replacement, who can run as an incumbent.

Mallott’s decision leaves an open seat with no heir-apparent. That eases the way for other candidates. They include a recently-announced slate of shareholders with business experience outside the corporation.

Sealaska will distribute ballots to its almost 22,000 shareholders on May 15th. They must be cast by June 26th.