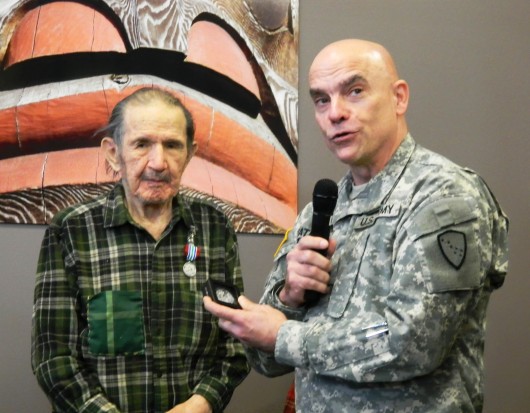 A local veteran who just turned 102 has been chosen by the national Honor Flight Network to travel to Washington, D.C., to visit the World War II Memorial.

He eats lunch most days at the Ketchikan Indian Community cafeteria. During a recent lunch, he chatted with Rudy James, who honored Neligan for his service.

“He’s going to be 102. He’s a veteran – the oldest one alive,” James said. “We’re all proud of him. He can sing good songs, sometimes when he feels good, he’ll get up and sing for us. He knows it all by heart, too. We love you very much, Henry.”

Neligan last year received his official honorable discharge from the Army, about 70 years after his service actually ended. The Army has been tracking down former ATG members for the past 13 years in order to officially discharge them from service.

Honor Flight started in 2005, a year after the World War II Memorial was completed. It’s an effort to allow remaining veterans of that war an opportunity to see the memorial built in their honor.

Neligan will be among a group of about 50 Alaska veterans traveling to the nation’s Capital this week.