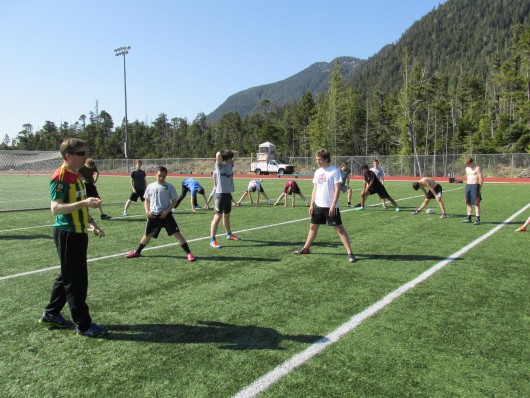 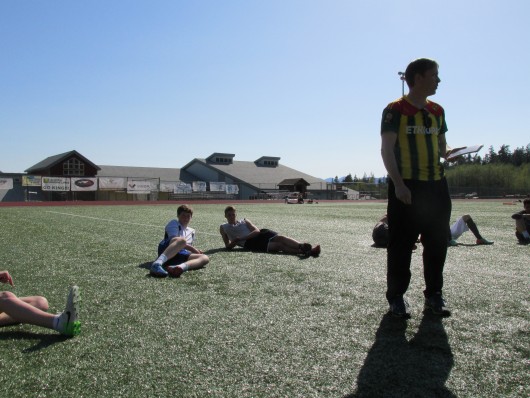 In April, about 50 high school sports coaches met in Juneau for training on a program called Coaching Boys into Men. It’s a national program that asks coaches to talk to the boys on their teams about things like respect, harassment, and violence. The goal is to help prevent domestic violence and sexual assault.

In Ketchikan, three of the high school boys’ sports teams are implementing this program.

On a recent afternoon, Ketchikan High School soccer coach Scott Brandt-Erichsen is standing in the middle of about 35 teenagers who are stretching in a circle.  He talks about upcoming practices and travel.

But then he turns to something else — aggression.

“How does aggression help you in the game?” he asks. “What problems can be caused if you’re too aggressive in a game? Outside of a game?”

The boys chime in with “detention,” even “jail.” The continue to bounce ideas back and forth about when aggression is appropriate and when it’s not.

Brandt-Erichsen and his team call these “Choose Respect” lessons. They’re based off of the Coaching Boys Into Men playbook.

“The general philosophy of it is, if you can communicate with and educate a group of young men when they’re high school age, and they can set an example for their peers. You can set example that domestic violence is not appropriate.” Brandt-Erichsen says.

“We all have times when we get angry, but we shouldn’t let that make us violent or abusive,” Brandt-Erichsen wraps up the discussion, which lasts about 10 minutes. Then they begin practice.

Brandt-Erichsen started the Coaching Boys into Men lessons last season. Some of his players say they were confused at first.

“As a teenage boy, I was a little bit skeptical at first,” says senior Sam Ortiz. “Getting guys to sit down for 15 minutes during practice and talk about feelings and stuff…I was skeptical but we worked out pretty good actually.”

At Kayhi, the boys soccer, baseball and basketball teams are using the Coaching Boys into Men lessons.

The basketball coach, Eric Stockhausen, was one of the first coaches in the state to use the program. Four years ago, Stockhausen was one of four Alaska coaches to learn Coaching Boys into Men. He decided to take it on when he got a call from Diane Gubatayao at Women in Safe Homes. 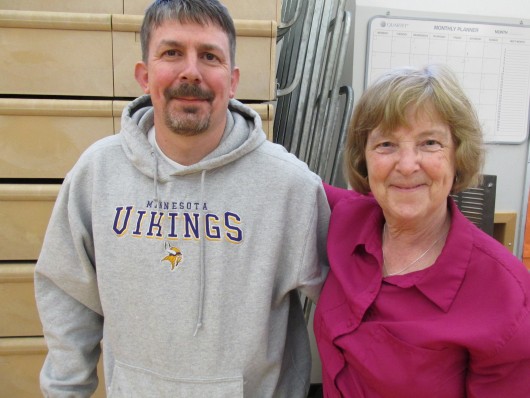 “I think it’s an awesome idea,” Gubatayao says. “First of all, your coaches are natural mentors, natural role models for young men. Not only that but the young men on these teams, these varsity athletic teams, they have a special status in the school, people look up to them. Whether or not they deserve it. People look up to them and give them special regard.”

Let’s help them understand their potential to be positive role models for other students, she says. The argument worked for Stockhausen. He’s been using CBIM, as he calls it, for the past four years.

One of the most concrete things he’s learned? Think before you talk.

“[Saying] ‘That person throws like a girl,’ or teasing somebody, calling them princess or something. Those words seem harmless or seem innocuous,” Stockhausen says. “But if a young lady is the object of the negativity with how they throw or whatever, that’s going to undermine their self-confidence, possibly.”

Some of the soccer players say they’ve learned similar lessons.

“Even saying something that you think of as a joke, some people will take seriously but they won’t let you know that,” said sophomore Kenny Johnson. “So you have to think about what you’re saying, how that could affect people in a negative way.”

The players, coaches, and Diane Gubatayao all say Coaching Boys into Men has made a difference. Coach Stockhausen says it has helped his team focus on becoming better men, not just winning games.