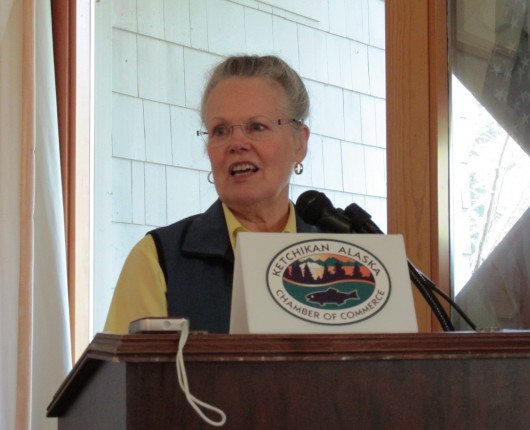 Retiring Rep. Peggy Wilson speaks at the Ketchikan Chamber of Commerce on Wednesday.

While looking forward to her retirement at the end of the year, Rep. Peggy Wilson still has some work to do. There are off-session meetings to attend, committees to chair and constituents to meet. Wilson came through Ketchikan this week (Wednesday), and stopped at KRBD’s studio to review her last legislative session, and her plans for the future.

Wilson says that the increase to education funding was one of the biggest triumphs of the recent legislative session. One of Wilson’s biggest disappointments was her proposed transportation infrastructure fund, which stalled in the Senate

Here’s a portion of Wilson’s conversation with KRBD’s, as she started talking about the failed infrastructure fund. Later, she talks about what she would choose if she were granted a single wish.

Wilson also talked about Senate Bill 21, the state’s revamped oil tax bill, and her hope that a ballot initiative to repeal that bill will fail. Wilson has been an elected state official for about two decades. She says her decision to retire was prompted by the birth of several great-grandchildren. You can listen to the expanded interview below: