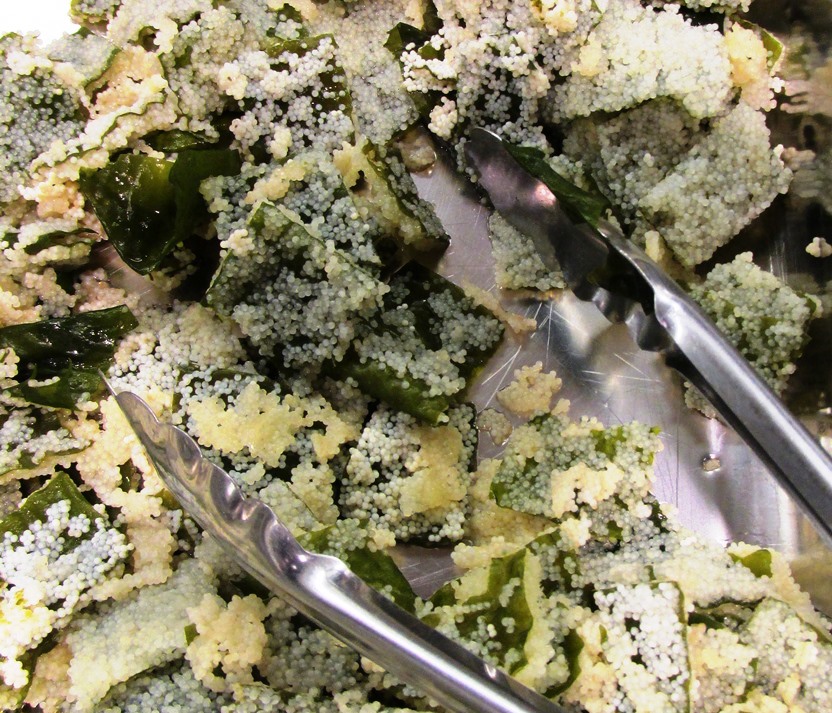 Herring eggs on kelp was among the menu items offered at a recent KIC Meals on Wheels lunch program.

Ketchikan Indian Community runs a Meals on Wheels program for its Native elders, and now offers traditional food on Fridays. It is a popular program, and elders who attended on May 2 were all smiles as they dined on food they remember from their childhood.

The smell of seafood was strong at KIC’s cafeteria, as elders ate lunch together and visited. A big topic of conversation was how much they all liked the food that day. Murphy James was inspired to stand up and give a little speech.

“I’m going to thank the cooks and the helpers that served this food to us,” he said. “This wonderful lunch is really great. I’m really happy to have eaten it and taken part of it.”

Dan Dodson is the new chef for KIC’s lunch program. He’s not Native, but his wife is. She taught him the traditions, and now he’s using that knowledge in the tribe’s kitchen. 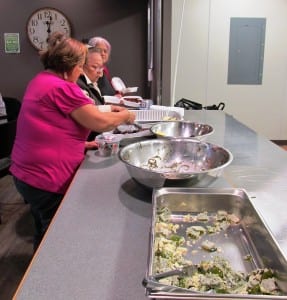 KIC elders box up leftovers from a recent traditional-food lunch, to take home for dinner.

“Today, we’re having steamed smoked salmon over steamed potatoes, eulachon grease, we have beach asparagus salad, and steamed herring eggs on kelp,” he said. “It’s one of their favorite meals.”

And, whenever possible, the ingredients are collected in the traditional manner.

“We collect herring eggs on branches and kelp. And we prepare them and freeze them, vacuum pack them and use them throughout the year,” Dodson said. “And we get our eulachon grease once a year from the grease man who comes up from Canada.”

Eulachon is a small, extremely oily fish that is an important traditional food. A nearby eulachon fishery has been closed for many years because not enough of the fish have returned to make it viable, which is why Dodson relies on the Canadian grease man.

Just a warning for those who aren’t familiar with it: Eulachon grease is not for the faint of heart.

“This grease is made from ripened eulachon,” Dodson explained. “They’re put into a vat and left to ripen for a few days. Then they go through a boiling process. It’s processed three or four times to remove the bones and different things. And you end up with the finished product. Would you like to smell it?”

I did, and it was not my favorite smell.

I haven’t quite acquired the taste for it. But if someone grows up with it – and the other items on the menu — they have this response:

“This is really good food and us Indians need to eat more like this,” said Rudy James. “It’s healthier for us, from physiological and psychological standpoint. It’s excellent. We’d live longer and happier and healthier if we ate more like this.”

“I’m a Haida Indian full-blood, and I’m possibly the oldest person in this room. I’ll be 89 in a 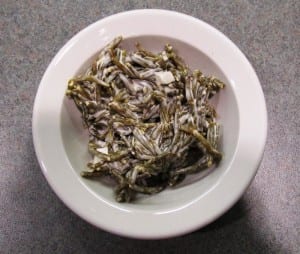 Beach asparagus salad was one of the traditional-food menu items at KIC’s elder lunch program.

couple weeks here,” she said. “And I’ve been coming to the lunches here since they opened. Today is one of the most healthful lunches I’ve had for a long time. I really appreciate what the people did here, and the people who contributed to the meal.”

While she was talking, her friend, Jane Smith joined us, and added that it’s becoming more difficult to gather traditional food. That’s partly because people are too busy with their jobs, she said, and partly because the ingredients are not as easy to find.

“It takes a lot of time to go get it, and you have to go further and further away from the town to get it, where it’s pure,” Smith said. “And it’s going to get worse with the mines coming in. Oh, boy. I don’t know where we’re going to get our food that’s clean and pure.”

Almquist agreed, and said she believes that wastewater from cruise ships also is affecting the wildlife.

She talked about the traditional foods that she ate while growing up in Hydaburg, her home village on Prince of Wales Island.

“A lot of seafood, (and) we’d grow our own potatoes, carrots, and we’d pick the wild asparagus (and) goose tongue,” she said. “And we had smoked salmon, usually smoked sockeye.”

As elders boxed up leftovers to take home, Chef Dodson made plans for future traditional-food Fridays. Smoked black cod, for example, and gumboots — a kind of chiton — that he would like to serve as an appetizer.

His customers will be ready to enjoy it, too. Several agreed that the lunch reminded them of a holiday meal.