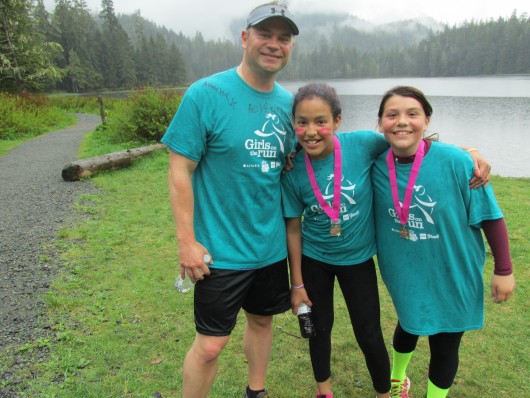 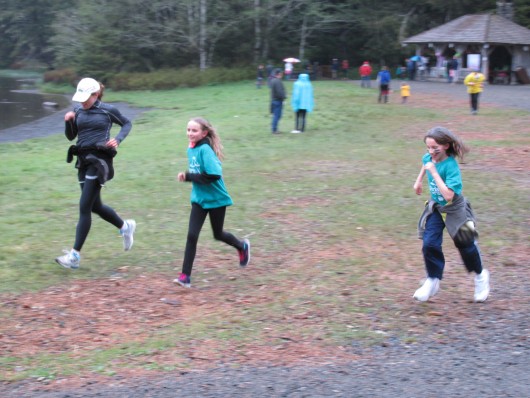 On Monday evening, about 60 pre-teen girls ran a 5K around Ward Lake with parents, teachers and coaches. It was the finale of the Girls on the Run program, which uses running and mentorship to build self confidence in young girls.

The girls wore turquoise T-shirts with the Girls on the Run logo. Each has the number 1 pinned to the back. They run in the drizzle next to coaches who have been with them for the whole 12-week program.

“This is the celebration of the season,” said Diane Gubatayao. “They spend 12 weeks training to run this race. And it’s not really a race, it’s a run. It’s not about winning, it’s about finishing and doing it.”

Gubatayao is in charge of prevention programs at Ketchikan’s Women in Safe Homes, or WISH. She helps organize the Girls on the Run program here.

One of the people cheering girls on is Molly Barker, the founder of the nationwide Girls on the Run program. 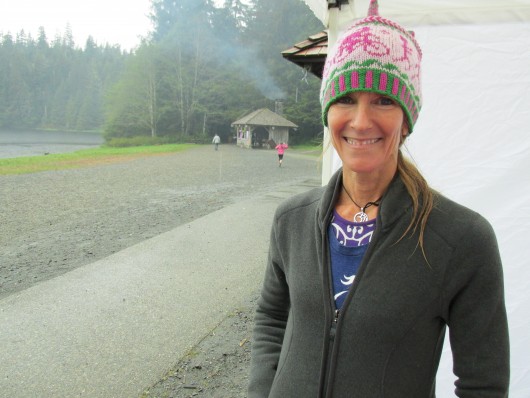 Molly Barker founded Girls on the Run in North Carolina. She was in Ketchikan for the final race.

“Girls on the Run is a character development program that gives girls the tools to navigate adolescence and life with a strong sense of self,” Barker said.

“I’ve been a runner my whole life,” Barker said. “And running really was a place for me where…and we all have them, those negative voices in our head that may say “I’m not pretty enough, I’m not smart enough.” When I ran, those voices went away and I felt very strong and empowered.” 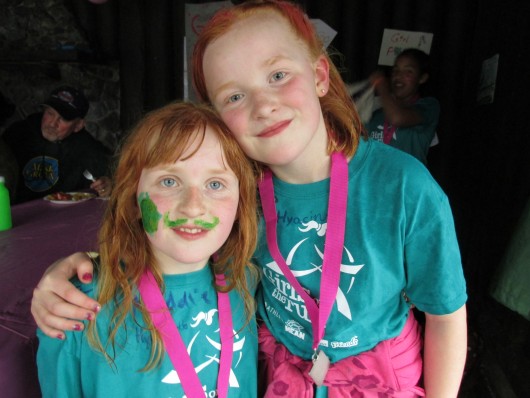 Sisters Maggie and Lena Hert are two Girls on the Run. Maggie says bullying is a struggle for 11-year-olds.

Moving forward from what? Maggie says the hardest thing 11-year-old girls go through is bullying.

“I have a friend and she likes a boy and the boy makes fun of her,” she explained. “And I don’t get why she likes him. I want her to feel good about herself, but it’s hard to do that when she likes the boy.”

One of the coaches, Chad Lawler pointed out one way Girls on the Run deals with bullying.

Chad ran the 5K with 11-year-old Jasmine Stevens. She wore a pink medal around her neck after finishing the run.

“I felt great and I felt in the power, like I was the person controlling everything,” she said.

Chad Lawler, a Girls on the Run coach, with Jasmine Stevens and Jaat Haana Timmerman.

Some of the girls said they were worn out from the run. But it seemed like the adrenaline level was still pretty high.

“They just say you can do it!” 9-year-old Lena Hert said enthusiastically. “They are always saying let’s run, come on, you can do it.”

You can do it. It’s a simple message that applies to both running and overcoming the trials of grade school and middle school.