Slugs: Garden pests, but important to the forest 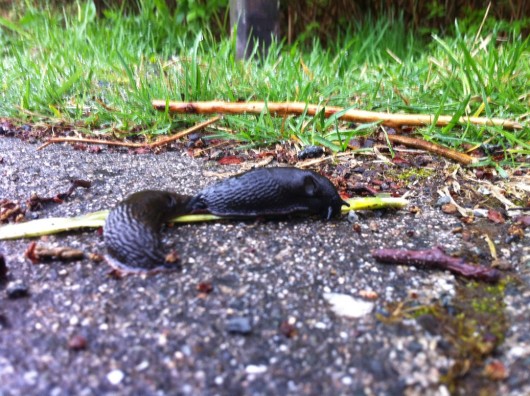 A couple of invasive slugs enjoy breakfast on a cool, rainy spring morning.

Spring in Southeast Alaska is heralded by songbirds waking us early in the morning, hungry hummingbirds drinking nectar as fast as we can refill the feeders, bright yellow skunk cabbage poking out of mud bogs; and slugs.

Slugs are found throughout the United States, but are prevalent in rainy Southeast Alaska. And while slugs do have an important job in nature, they are the bane of gardeners.

A recent Ketchikan Garden Club meeting was a great opportunity to talk with some people who are on the front lines in the ongoing battle against slugs.

“I saw a slug. One of those tiger slugs,” announced garden club member Jos Govaars. “It must have been already six inches tall.”

While originally from Holland, Govaars has lived in Ketchikan for a long time, and is a gardener. Like most Southeast Alaska gardeners, he has his own favorite way to deal with slugs.

“Those sticks – what you put the meat on. Skewer sticks! I get those and go down the yard and pick them up. So I don’t even have to get them on my hand,” he said. “Just stack them up like shish-kebob. I don’t fry them, by the way. I’m not French.”

Govaars’ house is close to the beach, so he has a really simple disposal method, too. He slides the slugs right off the skewers and into a bucket of seawater.

“When I get a bucketful, it stinks like the devil,” he said. “I throw the contents back into the sea – back to nature – get another bucket of seawater, and go to my work again.”

Salt can kill slugs because it causes water to leave the gastropod’s body. Just pouring salt on a slug isn’t always effective, though.

Rebecca Jackson is another Garden Club member, and has had slugs slither away from underneath a pile of salt, completely healthy. They had used their outer slime layer to protect themselves.

While she’s been considering slug bait – a poison designed to kill slugs specifically — Jackson has used the hand-pick method, which involves gloves, and what she likes to call “stick and flick.”

“The stick and flick, I just have some old kitchen knives around in my garden,” she said. “You just stab them and then flick them into the neighbor’s … I mean the woods.”

Jackson said there’s a spot where she has to be careful not to flick too hard, or the slugs will end up in the neighbor’s garden. And that wouldn’t be nice. One brand of slug is safe from Jackson’s knives.

“I would say 95 percent of the slugs I see are not banana slugs. So when I do find a 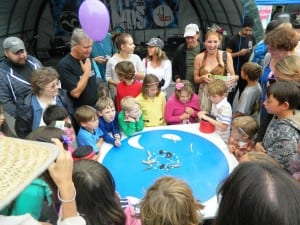 banana slug in my garden, they’re so rare, and I have such good memories of catching banana slugs for the Blueberry Festival slug race with my daughter, that I normally just toss them into the woods,” she admitted.

Yes, she did say slug race. For those who aren’t aware, the Blueberry Arts Festival slug races are an annual summertime tradition in Ketchikan.

And Jackson’s compassion for banana slugs is not misplaced. Patty Krosse is with the U.S. Forest Service, and part of her job is keeping an eye on invasive species. There are native slugs in Southeast – like the banana slugs — as well as introduced slugs.

“I believe there’s only one introduced slug,” Krosse said. “It’s a dark black color, and it has this, what they call a hood on the top of its body.”

Krosse said there are black or brown native slugs, but they don’t have that ridge. She adds that it’s the introduced ones that usually are found in gardens. So far, they haven’t moved into the forest.

“And that’s why, at least at the Forest Service, we’re not overly concerned about that introduced slug in the natural habitats,” she said.

Speaking of natural habitats, slugs are an essential part of the ecosystem. They help speed up the decomposition process in the forest.

“They’ll eat organic material – the very woody cellulose part of leaves, and that breaks down and that creates organic carbons that get processed through the soil and that’s all good,” Krosse said.

While decomposition is the primary function of slugs in nature, there are other potential applications out there.

Here’s Govaars again: “A number of years ago we were in Holland, and here is the newest facial cream. Slug slime. I’m serious.”

When it was suggested that he go into business, he laughed and said, “I could make a million bucks apparently.”

We’ll let you know if Govaars ever decides to start that new business.