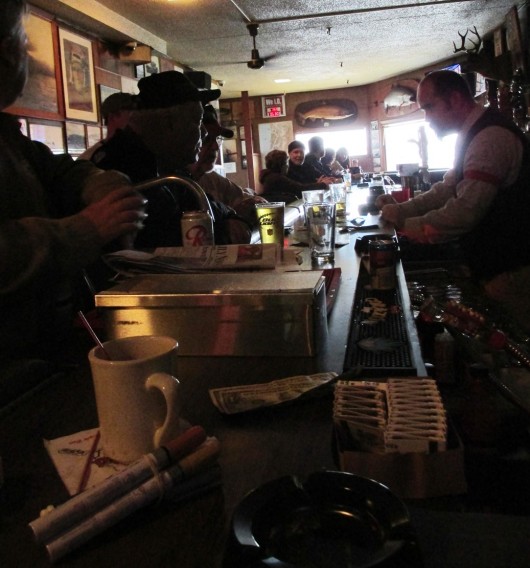 Patrons at the Sourdough Bar sit at the bar and smoke the day before the downtown business went smoke-free.

The Ketchikan City Council will discuss the idea of a citywide smoking ban during its meeting Thursday.

Council Member Marty West placed the smoking discussion on the agenda, but didn’t propose any action item. She said it’s just something to talk about.

“Several people had approached me and asked that I bring it up for discussion at the Council to see what the interest was,” West said. “That’s pretty much it. People have asked me before if I would bring something up for discussion and I have. This seems to have created quite a little firestorm, but I’m doing it at the request of constituents.”

West declined to elaborate on the record about the “firestorm.”

The Council considered, and rejected, a smoking ban 10 years ago. There was significant public comment, with many people opposed to the idea of a government-mandated ban on indoor smoking. West was on the Council then, too, and says she was the sole vote in favor of the smoking ban.

Since then, several restaurants and bars in Ketchikan have chosen to not allow smoking. In a somewhat historic move, the Sourdough Bar went smoke-free just a few weeks ago. So the big question is: Has the attitude changed over the last decade?

“I don’t know,” West said. “That’s why I wanted to bring this up for discussion, just to see what the feeling was. This is not some issue that I’ve had as my priority, but it’s something that I think bears discussion. And that’s what I hope to do on Thursday night. And I hope it’s civil.”

Also on Thursday, the Council will consider a feasibility study related to placing biomass boilers at Ketchikan Medical Center. The hospital remodel project has begun, and new boilers potentially could coincide with that project. The study would cost up to $35,000.

Another issue on the agenda is the expiration of bonds for city and Ketchikan Public Utilities projects. About $5 million of unused bonds remains from two different bond packages that voters approved in 2004 and 2005. But those bond packages both expire this summer.

City Manager Karl Amylon recommends that the city prepare bond packages to place before voters in October. He writes that without the ability to borrow money, the city and KPU will have a tough time maintaining the city’s aging infrastructure.