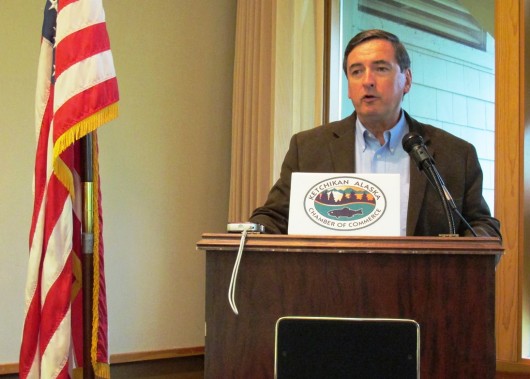 Dan Sullivan is the mayor of Anchorage, and is running to replace Mead Treadwell as the state’s lieutenant governor. Sullivan is taking a tour of Southeast Alaska, and stopped in Ketchikan on Wednesday, where he spoke to the local Chamber of Commerce.

Dan Sullivan is a lifelong Alaskan, and a longtime Anchorage resident. He recalls delivering newspapers in Alaska’s largest city when he was just 9 years old. More recently, he served on the Anchorage Assembly, and first was elected as the city’s mayor in 2009.

Sullivan is about to finish up his second third-year term as mayor. Term limits prohibit him from seeking re-election. Lieutenant governor looked like a good opportunity to continue in public service.

“One of the reasons is that I think the role of the lieutenant governor can be different than it’s been in the past,” he said. “Oftentimes the governor and lieutenant governor aren’t particularly close for whatever reason. Maybe they haven’t developed a friendship, or philosophically maybe they aren’t as aligned as they could be. I don’t think that’ll be the case if we’re successful in getting elected.”

Sullivan said he is already friends with Gov. Sean Parnell, who is running for re-election in the Republican primary. Sullivan added that he works well in a team, and would use his position as a cabinet member to promote good policy.

Sullivan said some areas he wants to focus on include energy, education, promoting value-added businesses and fighting for statehood rights.

Regarding energy, he supports developing Alaska’s renewable energy resources, and using some of the state’s reserves to build that infrastructure for the future.

And speaking of resources, Sullivan said he would like to focus on improving Alaska’s public education system.

“We’re a resource state, but we don’t seem to be making gains in our human resources,” he said. “That’s an area where we also have an opportunity to make a significant investment and do it now, because long after that last drop of oil runs out, it’s the human resource that’s going to be the mainstay of an economy.”

Sullivan touted Finland’s education system, which requires teachers to go through an eight-year program before they can teach class. The government pays for the teachers’ schooling, and then the teachers are required to teach public school for a certain number of years to pay back that free education.

Sullivan said Alaska could start a similar program. And how would we pay for it?

“Well, again, we’ve got tens of billions of dollars in the bank, why don’t we take a couple hundred million, put it into a great teacher fund?” he said. “The interest from will could fund the college education of top 5 percent students who decide to go into teaching.”

Sullivan also said he wants more production in Alaska, so that fewer raw resources, such as unprocessed gold or round logs, end up getting shipped out of state.

And as a fourth-generation Alaskan, Sullivan said he’d be an enthusiastic ambassador for the state. Part of that would be fighting for Alaska’s state rights. He said that includes getting the 20 million acres that’s still owed to the state from the federal government, and controlling the state’s resources.

“One of the things I’ve suggested, too, is that if I was governor today, I’d probably invade ANWR,” he said. “What are they going to do, shoot you? Well, they might. But martyrdom goes a long way sometimes.”

He was referring to the longstanding debate over whether to allow oil exploration in parts of the Arctic National Wildlife Refuge.

Speaking of oil, Sullivan said he plans to vote “no” on the ballot initiative calling for the repeal of Senate Bill 21. That bill revamped the state’s oil tax structure, and there’s a strong push from people who believe the new structure gives too much to oil companies.

Sullivan said he believes that SB21 is working, and that oil companies are increasing production because of it.

An audience member asked Sullivan how Southeast residents can be sure he would represent this region as well as his hometown of Anchorage. Sullivan points to his experience with the Alaska Municipal League.

“Gathering together the 70 or 80 top representatives from around the state of local communities, it’s really been very helpful to me to know what the issues are,” he said. “And a lot of time, they’re common issues. Energy is a common issue in every corner of the state. Having sustainable city revenue is an issue everywhere.”

And for those issues he might not yet know about, Sullivan said that’s one reason he decided to take a tour of Southeast leading up to this summer’s primary.