Emergency ‘Radio in a Box’ ready to deploy 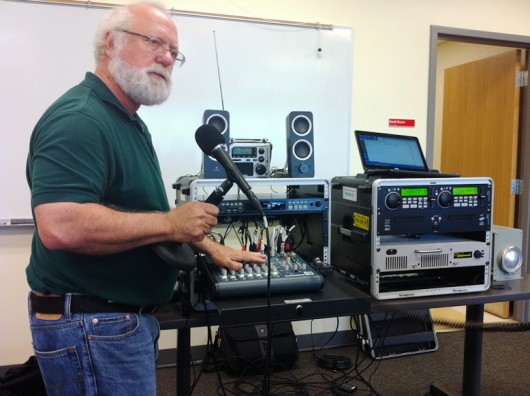 Rich Parker demonstrates how to do a live broadcast from the new, portable emergency radio system.

The radio in a box is actually in several boxes, plus a few bags. It’s a portable radio studio, complete with its own transmission tower. The emergency studio will allow KRBD to broadcast, even if the radio station is disabled in a disaster.

It’s also portable, so it can be taken to a high point on the island, to reach as many people as possible, and assembled there.

A crew from KRBD took it to Ketchikan’s downtown fire station, where visiting CoastAlaska engineers Rich Parker and Kevin Hurtley demonstrated how to put the Radio in a Box together, and get it reKevin Hurtley assembles part of the portable transmission tower for the new emergency broadcaady to broadcast.

The emergency radio studio was purchased through a $35,000 Community Resilience Innovation Challenge grant from the Federal Emergency Management Agency. That grant also paid for 1,000 hand-crank emergency radios, which KRBD has been distributing free of charge to Ketchikan residents.

Fire Chief Frank Share was on hand for the demonstration, and talked a little about how the ability to broadcast, through live or recorded messages, would be helpful during a disaster.

He said those running the equipment could record a CD or mp3 message that tells listeners when the next update will be announced. When it’s not providing updates, the Radio in a Box could broadcast recorded music. 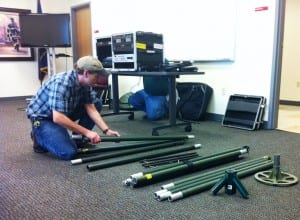 “They can at least listen to some entertainment, listen to something to keep them calm,” he said. “And they know when to pay attention, especially the people with the hand-crack radios, for an update.”

KRBD worked with the Local Emergency Planning Committee to obtain the grant. Station Manager Deb Turnbull, who is on the LEPC, said committee members will talk about a whether a training drill should be scheduled to practice setting up the system outdoors.

The emergency system has a limited range, so it wouldn’t be able to reach as far as KRBD’s regular listening area. But, it could be moved to different locations as needed. Two other Alaska communities – Sitka and Juneau – also have emergency studios.

Turnbull said she hopes more communities will apply for grants to obtain their own Radio in a Box. She said FEMA officials like the idea of improving emergency communications.

“The understood after Katrina, and Sandy again in New York, that one of their biggest obstacles for successful recovery initially was the lack of communication, and where to tell people to go to get what,” she said.

But, Turnbull noted, the first step for everyone is to have their own emergency kits – including a hand-cranked radio. And keep them ready and easily accessible, so that people have the basic essentials until emergency responders are able to provide help.