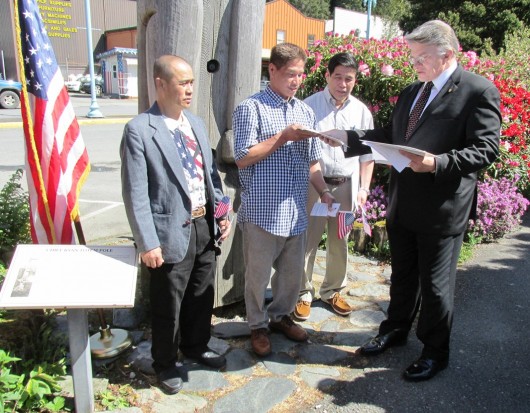 Three Ketchikan residents became U.S. citizens Friday in a sunny, outdoor ceremony. Listen to this audio postcard from the event, which started with the setting up of the U.S. Flag in front of the Chief Kyan totem pole.

Friday’s citizenship ceremony was the first such ceremony in Ketchikan since 2006.

The three new Americans are Rogelio Casilla, Crispin Casilla and Gulagdo Rarican. They all had been citizens of the Philippines.

Becoming a U.S. citizen isn’t easy. Among the requirements is knowledge of U.S. government and history, demonstrated by passing a test. Each year, though, nearly 700,000 people become naturalized U.S. citizens.