One injured, one cited in downtown accident 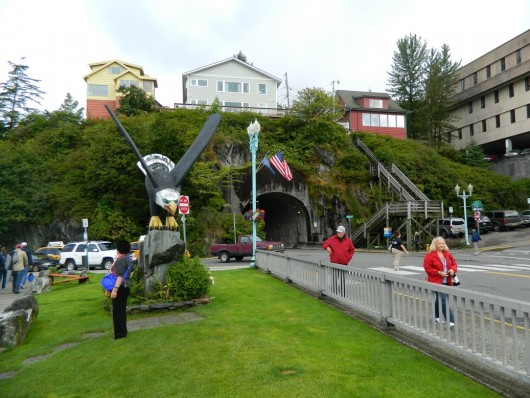 This picture from last summer shows the south end of Ketchikan’s downtown tunnel.

One person was injured after the vehicle she was riding in rear-ended another car Tuesday afternoon at the south end of Ketchikan’s downtown tunnel.

Ketchikan Police Department Officer Charlie Johnson responded to the scene at 12:41 p.m. He says that 21-year-old Breanna Delaney was driving a 1991 Honda Accord when she rear-ended a 1998 Isuzu SUV driven by 25-year-old Stephanie Martin.

Police say that Martin had stopped for pedestrians crossing the street.

A female passenger in Delaney’s car was wearing a lap seatbelt without the shoulder harness. Officer Johnson says the passenger hit her head on the windshield when she was thrown forward during the impact. The passenger refused treatment at the scene, though, and told responders that she would go to the hospital herself.

Johnson says that Delaney’s car suffered disabling damage and had to be towed from the scene. The Isuzu had minor damage. Traffic was rerouted for about 40 minutes because of the accident.

Johnson says that Delaney was cited for failure to exercise due care to avoid a collision.