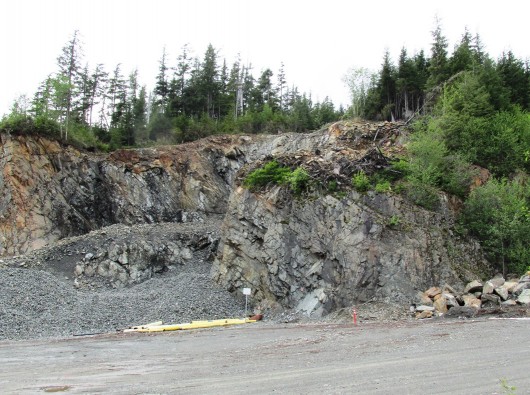 A rezone of about 13 acres off the Third Avenue Bypass was approved during Monday’s Ketchikan Gateway Borough Assembly meeting, along with a new way to manage site development plans.

First, I should mention that rezoned site is right next door to KRBD, and the station’s board of directors is on record opposed to the change.

KRBD Board Member Janice Walker spoke to the Assembly:

“Producing radio and crushing rock are mutually exclusive,” she said.

The rezone affects more than 13 acres that had been zoned for low-density residential. Following the Assembly’s action, half of the property becomes general commercial, and the other half light industrial.

The rezone is controversial in part because of the proposed rock excavation and crushing on the site. Those activities still are allowed. Because another measure approved by the Assembly provides for conditional use permits, or CUPS, and site development plans.

Planning Commission Member John Harrington added that the borough has had no regulations for site development.

“With this, we have a process where major site development will at least be looked at by the planning commission to build some reasonable plans, reasonable conditions, to fit the neighborhood where the site development is,” he said. “I think this is a good step.”

Here’s a short tutorial: No matter how a site is zoned, the owner has the right to develop it, which can include logging, rock blasting, drilling and more. What’s restricted by zoning rules has been processing and selling material on site. The new conditional use permit process gives the Planning Commission the power to allow those activities for a limited time, working with the property owner to create a site development plan with restrictions, including when certain activities take place.

When it came time for a vote, Assembly Member Bill Rotecki was the only one who opposed the new CUP process. He said the regulations have some good points. For example, the borough now will have an opportunity to place conditions on development. But: “I foresee opening up a lot of big problems because the planning commission has continually been extremely permissive. What this allows us to do is to have a quarry anywhere, everywhere, next to anyone.”

Don Wrobel spoke to the Assembly against both the rezone and the new CUP process. He lives in Bear Valley, below the Third Avenue site in question.

“I feel it’s a futile attempt to try and convince this Assembly to vote against this, but I’ll do my best,” he said.

Wrobel said that the Third Avenue property owners knew the site was zoned residential when they bought it. He said allowing a rezone, which increases the property value, devalues property that already is zoned for commercial or industrial use. Wrobel added that Bear Valley, a residential area, will be affected.

“I bought my house in Bear Valley in 1984, 30 years ago, before George Lybrand started to develop up there,” he said. “And that posed a major pain in the you-know-what to our neighborhood.”

Wrobel said the development activity created a mess for residents of Fairy Chasm in Bear Valley. And now, he says, 12 more acres of that kind of development can begin.

George Lybrand also spoke. He developed the Copper Ridge property where KRBD and the Ketchikan Public Library now are located, along with some other businesses. Lybrand said that in the past 27 years of development, there have been a total of 24 blasts.

“The number of total days of crushing up there in 27 years – 27 years is pretty close to 10,000 days – was 69 days,” he added. “I’ve heard all these stories about uncontrolled activity up there, night and day falling rocks. The records don’t verify that.”

The discussion about the rezone took place after the Assembly already had approved the new CUP process. Assembly Member Glen Thompson pointed out that activities that will or won’t be allowed now are up to the Planning Commission.

“So really, the question for us in this particular item is whether or not a change of use in that property is appropriate,” he said. “Whether or not changing it from residential low to commercial general, and residential low to light industrial, makes sense in terms of the use of the area long term, and the surrounding zoning.”

The motion to approve the rezone passed 5-1. Rotecki was the only vote against the change.

The Assembly also decided Monday to allow the annexation process to begin for seven parcels that would become part of the Forest Park Service Area. KRBD will have more on that issue in a later report.