Caught a king? It’s probably from a hatchery 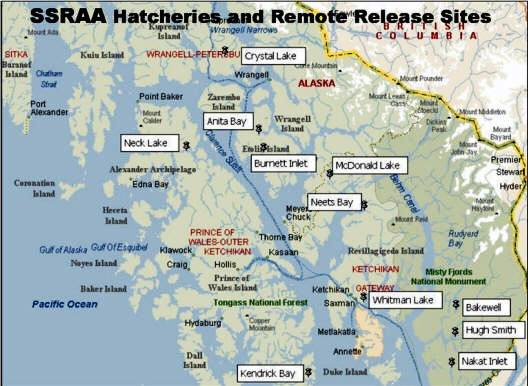 Are you fishing the Ketchikan King Salmon Derby? If you catch a nice, big king, you might want to call the Whitman Lake hatchery and thank them, because about 60 percent of chinook caught during Ketchikan’s annual fishing derby are Whitman fish.

Bret Hiatt is operations manager at the Southern Southeast Regional Aquaculture Association, or SSRAA. He shared that tidbit, along with other fishy statistics during a presentation Wednesday for the Ketchikan Chamber of Commerce.

Alaska loves fishing. And the whole point of SSRAA is to make fishing better. Hiatt said that’s why he loves his job.

At this point, you may ask “what do they do?” Well, they raise salmon, from eggs to juvenile

“We call our fish ‘enhanced’ because we’re increasing the amount of salmon available,” he said. “We’re removing some of the disadvantages the wild stocks face in natural stream settings, such as predators, environmental conditions, freezing and flooding, and drought.”

And by how much are the wild stocks enhanced? A lot. Last year, SSRAA facilities released nearly 8 million coho alone. The chum release is way larger than that; and kings? More than 2.5 million. 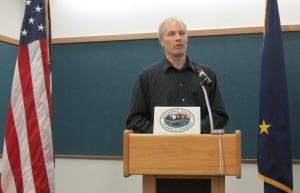 Bret Hiatt speaks to the Ketchikan Chamber of Commerce.

The reason for such large releases, is that the return is tiny. About 3 percent for chum, for example. But it has an impact.

“Fish and Game did an enhancement-contribution study showing that the contributions over the last 27 years has been $570 million to the Southeast region,” Hiatt said. “The average per year is over $20 million.”

SSRAA operates about 10 sites in a region stretching from the Canadian border to Petersburg. The incubation building at Crystal Lake hatchery in Petersburg was severely damaged in a fire last year, and lost a lot of stock. There will be some smaller releases from there as a result, but they are planning to rebuild.

“I guess the silver lining of this tragic accident is that we’ll be able to build a much more efficient building that will meet our needs in the future,” Hiatt said.

In addition to rebuilding, SSRAA is expanding. They’ve signed on to operate the Deer Mountain hatchery at Ketchikan’s City Park. That hatchery was run by Ketchikan Indian Community, but the tribe opted to end that program, citing economic problems.

SSRAA has the state permit to release salmon from the Deer Mountain Hatchery, and now it’s waiting for some facility improvements.

“There are some things in that facility that need to be taken care of as far as capital projects,” Hiatt said. “There was a leak that happened this winter that did some damage inside, and we’re still waiting for the resources from the city to remodel that facility.”

The City of Ketchikan owns the Deer Mountain Hatchery building. In addition to fixing the leak damage, SSRAA wants the city to remove what had been a bald eagle enclosure, which was operated by KIC along with the hatchery as a tourist attraction.

SSRAA is a nonprofit organization, which gets revenue through a tax that commercial fishermen imposed on themselves to help pay for better fisheries. The organization also gets money through a cost-recovery program.

Basically, the salmon that aren’t caught by fishermen come back to the release sites. Some are used to produce more fish, but there’s a whole lot of fish that aren’t needed.

“We contract out to a private processor to perform this cost recovery for us, and they pay us a royalty,” Hiatt said.

Last summer, SSRAA did its own cost recovery processing. This year, though, they’re working with Trident Seafoods, which will process about 5.5 million pounds of summer chum that return to Neets Bay.