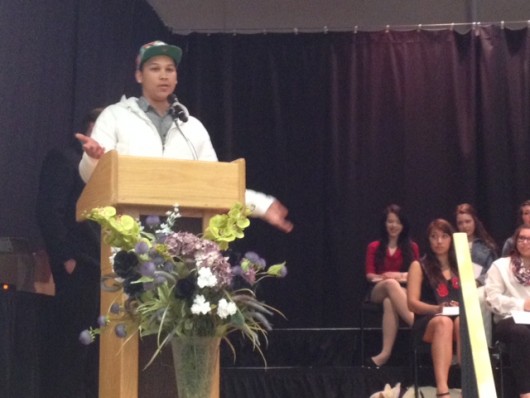 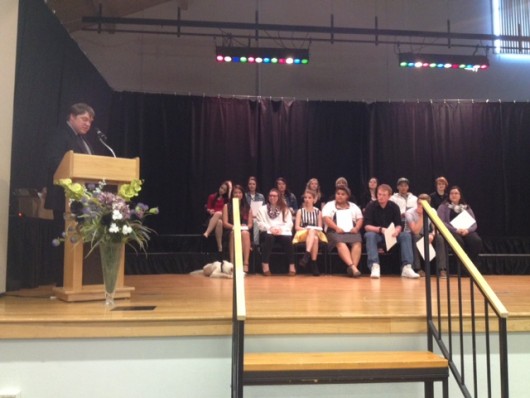 There are 21 graduates in Revilla Alternative High School’s class of 2014. A graduation ceremony was held for the students on Wednesday night.

A lot of the graduating students had moments where they weren’t sure they would make it to this day. In fact, out of the 21 students, three had just finished all of their required schoolwork about five hours before the ceremony.

Science teacher Adell Bruns was one of the staff who helped the students finish up their work.

“They’re great kids,” she said. “They work really, really hard for this. It’s sad to see them go but you know that they’re heading off to something else in life and it’s a good start.”

Revilla Principal Kurt Lindemann describes what the school does for students this way: when life happens, Revilla tries to fill in the gaps.

“I think the one thing that kind of ties us all together at Revilla is we’ve all had to overcome something,” Lindemann said in an address to the students. “And we’ve all done that, and I mean all of us, the staff and the kids. And this graduation is really proof of the things that you’ve all overcome. And I’m humbled to be in front of you.”

The keynote speaker at the graduation was Emily Chapel. She’s a Revilla graduate herself who now works for Southeast Alaska Independent Living. Chapel urged graduates to be honest, kind and passionate.

“I don’t care if it’s for Pokemon or rocket science,” Chapel said. “Passion is the fuel that keeps us moving forward. Your passions may change with time, but I encourage you to be passionate about something.”

After the graduates received their diplomas, there was an open mic for them.

“I was once told I would never graduate High school,” Michael Miller said. “And I’m glad I’m able to do so.”

Many of the graduates thanked the teachers and staff at Revilla.

“I made a family here, Revilla is my family,” Cheyene West said.

Cody Johnson performed a rap he had written a few months ago that applied to this moment.

Cody Johnson performed an original rap at the ceremony.

“My momma told me to reach for the stars, now look where we are…the only scary part is I don’t know where to start,” he rapped. “I might fall off-track every once and a while/ but that’s why we get back up and try again. It will be better in the in end…and ascend from the crowd cause you’re different.”

And then the students walked down the aisle to enormous applause.

Graduate Kathryn Carle said she was at risk of failing at Ketchikan High School, so she came to Revilla. 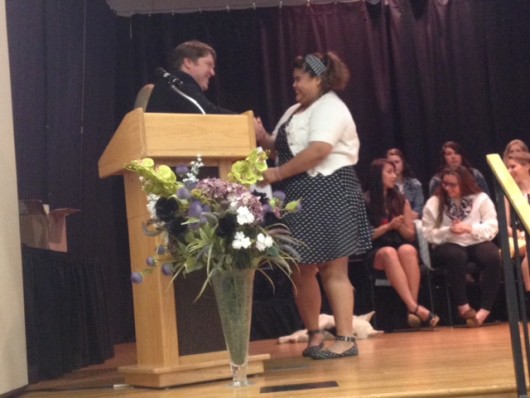 “I was very doubtful at first, when I found out I was behind in credits, I was really nervous,” she said. “But once I got to Revilla it was work at your own pace and push you.”

Now she’s got a diploma in her hand.

For a lot of these students, their Revilla experience has taught them this: they are capable of more than they think.