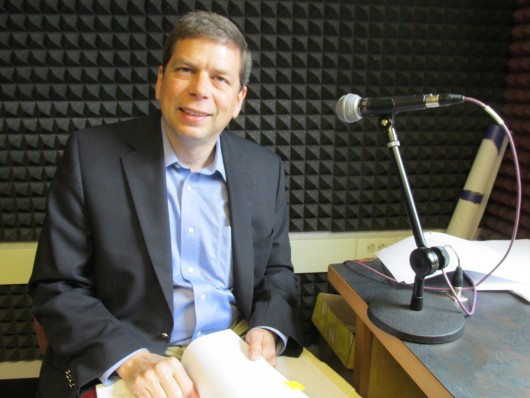 US Senator Mark Begich visited Ketchikan on Saturday. He toured businesses like PeaceHealth Hospital and Vigor Industrial Shipyard, and attended the opening of a Democratic Party office in Ketchikan.

The Democratic senator has represented Alaska in the US Capitol since 2008. He is up for re-election this November.

Senator Begich says it can be difficult to get the senate in Washington DC to understand issues in Alaska. KRBD asked him what he does in cases where federal policy could be damaging to the unique circumstances people face here.

For example, new federal guidelines for the Healthy and Hunger Free Kids Act will restrict what high school teams sell in concessions at tournaments and other events. Those concession sales make up a big portion of their fundraising, which they need to travel to compete.

The Ketchikan School Board has tried to get approval to amend the federal policy so it wouldn’t affect team fundraising and hasn’t been successful.

“One of the issues there is trying to streamline [out] some of the products that are just not healthy,” Begich said. “But it is tough. But we have to figure out with an obesity rate on of the highest in the nation, what are we going to do to combat this issue? And how to live a healthier lifestyle. Because at the end of the day, we’re all picking up the bill for unhealthy lifestyle. Less bad stuff means, healthier person, less costs, and less healthcare costs.”

Begich says obesity in Alaska is the bigger issue here. A recent survey of schoolchildren in Ketchikan found that 42% of pre-kindergarten through 9th graders are overweight or obese.

Begich also talked about the VA healthcare controversy, in which dozens of veterans died because of delayed medical care. Begich had pressed the now-resigned VA Secretary Eric Shinseki to punish people in the VA who were responsible.

“I think the challenges around the country [with VA healthcare] are appalling and I think people who have caused issues with the waiting lists, committed fraud of any kind, need to be held accountable and need to be prosecuted,” he said. “But we also need to fix the system.”

Last week, Begich gave a presentation on the Senate floor about how Alaska has improved veteran’s healthcare – cutting down wait times by focusing on improving access.

“I saw this problem in ’09, we took it on, got results,” Begich said. “Today we see the benefits of it for our veterans in Alaska. Doesn’t mean it’s perfect, we have more work to do, but just the fact we were able to do that shows it can be done. Alaska is the example.”

Begich says he will make accomplishments like this the focus of his campaign for re-election. If you live in Alaska, you’ve probably seen attack ads against Begich.

“It feels like all their doing is beating on me, whoever they are,” he said.

Begich wouldn’t specify who he sees as his main competition in the upcoming election. There are multiple candidates vying for the Republican, Libertarian, and Independent spots.

“Who knows who will be the candidate on the other side,” he said. “What I’m gonna concentrate on is the issues that I care about.”

Begich commented on two issues that will be up to voters to decide on the November ballot: a minimum wage increase and legalization of recreational marijuana. He said he supports raising the minimum wage. As for medical marijuana, he said he’ll let voters decide that issue.