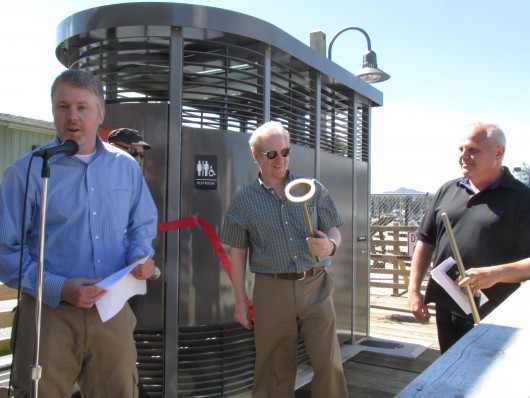 A ribbon cutting ceremony for a new public facility was held Thursday morning (June 12th) in downtown Ketchikan. The christening of the Stedman –Thomas Neighborhood Loo attracted about 40 people on a sunny and windy morning.

With public restrooms few and far between in downtown Ketchikan, the much-needed facility was opened light-heartedly with plungers, poo cookies, and toilet-paper-for-napkins on hand. Borough Transit Director Kyan Reeve says the state-of-the-art design is used in Portland, Oregon and cost less than $100,000.

“This bathroom is really quite high tech. As you can see the louvers on it allow for self-policing by the community. When you see more than one set of legs in there you know that you probably need to call the authorities. There is a motion-detection lighting system that, at nighttime, lights up the signs on the outside. But when somebody goes inside the facility it turns off the outside lighting and turns on interior lighting. You can see the light coming up and out of the louvers to help to identify that it is in use. The lighting is a special anti-vein lighting, kind of a bluish color, the same color as your veins, making it hard to use illicit drugs in there.” 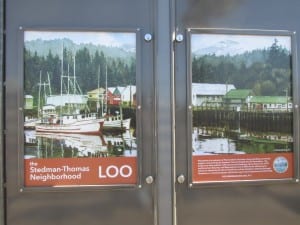 Reeve says the facility is very sparse with only a toilet and a hand sanitizer. The hand sanitizer is mounted outside the bathroom. He says this makes it easy to clean and eliminates the “hotel effect.” Reeve says a sink and mirror can attract people to stay.

Reeve, Borough Mayor Dave Kiffer, and City Mayor Lew Williams III were among the speakers, along with Major Loni Upshaw of the Salvation Army. Mayor Kiffer was the first to speak. 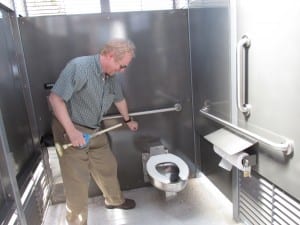 Mayor Kiffer, holding a golden plunger, cut the ribbon, officially opening the loo, and christened it with a ceremonial first flush.

The first person to use the Stedman-Thomas Neighborhood Loo was Ketchikan resident Raffy Tavidagian.

Public art was also revealed during the ceremony. Metalsmith Rich Stage created four plant hangers that are mounted at the top of two lamp posts on the bus shelter near the loo. Reproductions of watercolors by Elizabeth Rose grace the signs on the outside of the bathroom itself. 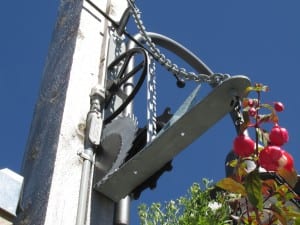 One of the pieces created by Rich Stage

Reeve says the facility will be open 24 hours a day during the summer.

As a bus pulled up, Ketchikan resident Marvin Davis led a song he wrote sung to the tune of the Teddy Bear’s Picnic.