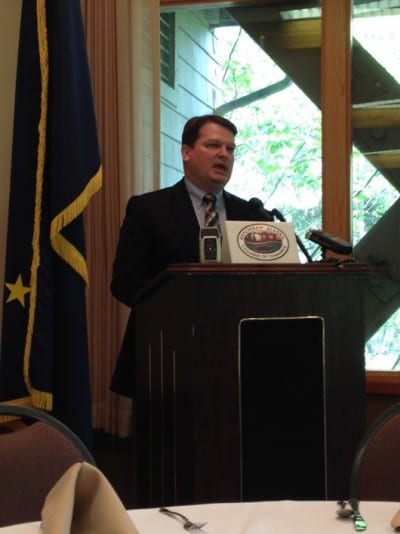 Transfer of lands into State hands and a reliable source of energy are key to development in Southeast Alaska. Those remarks were made by Joe Balash, Commissioner of the Alaska Department of Natural Resources, at last week’s (June 11th) Ketchikan Chamber of Commerce luncheon.

Balash began by explaining how DNR works in general, and how projects are permitted on State lands. He also spoke about Alaska’s natural gas pipeline project, as well as issues affecting development in Southeast Alaska.

Balash says with most of the land in Southeast Alaska owned by the Federal Government, the State’s opportunities to affect decisions are limited. He says that’s why the Parnell administration is focusing on establishing a Southeast state forest and bringing lands currently not state-owned into that forest.

“…especially some of the Tongass lands. That’s something that we think, in the long run, is the best way to help sustain what we have left of an industry here, and hopefully grow it for the long term.”

Balash says while working in the governor’s office under a previous administration, he was involved with discussions on the Tongass Land Management Plan. He says at that time, everyone was excited about what was then known as an “adaptive growth strategy.” Balash says there was optimism at that time that timber harvest issues would be resolved, but things didn’t work out as planned.

The Federal system has gotten to be so complicated in many respects, that it’s really easy for those who want to (can) poke sticks in the spokes and slow things down.”

Balash says the long-term solution is to get forest lands into state hands.

“…in order to make sure there’s stability for the industry so that investments can be made in the infrastructure necessary to support those jobs and the communities here.”

He says the Mental Health Land Trust Authority is working to facilitate land exchanges with the Federal government. Balash says there has been debate on whether the best way to acquire Federal lands is administrative or legislative.

“Trying to get Congress to agree to anything related to the Tongass is difficult. We’ll see.”

He says, working with the Alaska Mental Health Land Trust, the Parnell administration has been making some progress towards Federal land exchanges. Balash says he’s hopeful an exchange will happen late next year.

Balash also spoke about the need for additional energy. He says there is tremendous energy potential in Southeast, especially hydropower. Balash says what’s most needed is transmission lines to connect the power sources to new developments, including mining projects.

“Mining is an industry that requires substantial investment. In order for that investment to make sense, there has to be a reliable, affordable, stable, source of power. Hydropower is a great answer to that particular challenge and hurdle.”

He says DNR is working to streamline processes, without compromising standards, so projects can be approved more quickly.