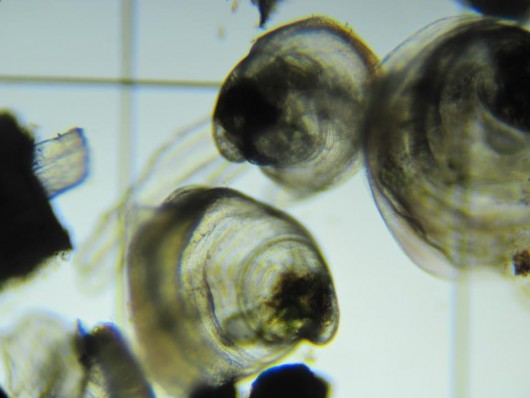 Following about two hours of discussion Monday night, the Ketchikan Gateway Borough Assembly approved a $144,000 grant to OceansAlaska, and directed the borough manager to investigate a loan of up to $600,000 for that nonprofit shellfish seed producer.

It was an uphill battle for OceansAlaska officials to convince Ketchikan’s Borough Assembly to not only provide more grant funding, but also to seriously consider a loan, to be paid back over 20 years.

OceansAlaska is in a financial mess right now. It has debt that it can’t pay, and officials publicly admit that a previous borough loan was misappropriated. The board of directors is new, though, as is the staff. They’ve come up with a new business plan, hired a bookkeeper and say they’re dedicated to making the organization viable.

But they need money to make that happen. And they say if the borough invests in OceansAlaska, those public funds will come back. Not just through repayment of the loan, but through the growth of a fledgling industry.

Peter Metcalf is on the OceansAlaska board, and works for Juneau-based Goldbelt, Inc. He said Goldbelt is developing a geoduck farm at the site of an old logging camp at Hobart Bay. The biggest issue is finding a source of seed.

“The bottleneck that we’ve experiences in trying to bring this project to life is seed. And that’s where I entered the world of OceansAlaska,” he said.

Metcalf said they received some seed from Alutiiq Pride hatchery in Seward, but they weren’t ready to plant. His geoducks now are at OceansAlaska’s barge, eating algae grown on site, and slowly developing until they’re ready to go into the bay. Metcalf said Goldbelt is prepared to become OceansAlaska’s biggest customer.

Greg Fisk developed the new business plan for OceansAlaska. He said the new board of directors wants a commercial-style approach to production, and they believe a focus on geoducks is the way to maximize revenue for the organization.

Fisk said the business plan is conservative on production and revenue estimates, but liberal when it comes to costs.

“The result basically showed that the organization could start turning an operational profit in about four years out from the start of production in 2015, with really good results after that,” he said.

The plan is based on successful business models from shellfish hatcheries Down South. But a big part of that plan is a long-term development loan from the borough, for up to $600,000.

The plus side of that proposal is that the money presumably would be paid back. But, considering OceansAlaska’s recent financial problems, Assembly members were hesitant.

Mike Painter wondered why private enterprise – such as Goldbelt – didn’t invest in OceansAlaska instead of the borough. Metcalf responded that Goldbelt’s role is that of customer, not investor.

“It’s possible that Goldbelt would feel the need to recover the situation if, doomsday scenario, you don’t fund this and suddenly there’s a barge. Maybe Goldbelt would take that, and move it. Which we would almost certainly do, to Sitka,” he said. “Because as well as Ketchikan’s placed overall, we don’t believe it’s the best place for geoduck. There’s things to be said about Sitka.”

Assembly Member Alan Bailey said his concern is over risking the public’s money.

“The language that I continue to hear is potential, I hear risk, I hear skin in the game. I can’t ignore the history of OceansAlaska. That simply can’t be ignored,” he said.

Fisk said there’s plenty of skin. He is working for free on the project, and paid his own way from Juneau to attend the meeting. Board members have personally paid some of OceansAlaska’s debts, to keep the organization running over the short term. And, Fisk said, the requested loan, rather than another grant, helps keep the organization focused on making money.

Moving forward with a grant, that would be rolled into a loan if negotiations are successful, was proposed by Assembly Member Agnes Moran. She said the grant will keep OceansAlaska afloat while details of the loan are worked out.

“I fully appreciate that there’s been trust issues here, and we do need to proceed cautiously. But I think if we are going to resolve all of the questions we have about risk versus outcome, we need time,” she said. “The only way we’re going to get time for them is if we do the combination up front of the grant and then investigate the loan package. And if if looks like it’s not going to come to fruition, then you have the opportunity to close them down gracefully without leaving a mess in the community.”

“It’s like a house of cards and we keep stacking cards on top of each other and hoping it’s going to be really big and take off on its own. But so far we’ve shown that we’re not very good at picking winners and losers, and we need to leave that to the market,” he said. “I think it’s time for us to let this thing die out on the vine right now, and step back and let the industry come together and come up with a better plan and a better mousetrap moving forward.”

Thompson didn’t convince the majority, though. Moran’s motion to approve the grant and move forward with a loan to OceansAlaska passed 5-2. Thompson and Painter voted no.

Also on Monday, the Assembly introduced an ordinance restoring funding to the city-run Ketchikan Public Library. A public hearing on the ordinance is set for July 21.