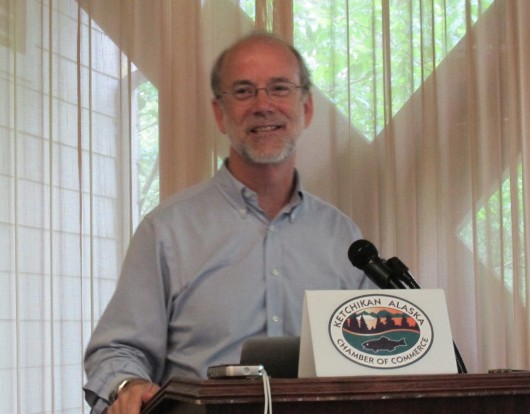 Sen. Hollis French is on the campaign trail, running as a Democrat for lieutenant governor. He is in the middle of a Southeast tour, and stopped in Ketchikan this week. French visited the shipyard, the hospital, and the Women in Safe Homes shelter; and gave a presentation at the Greater Ketchikan Chamber of Commerce.

French also stopped by KRBD, to talk about issues facing Alaska in general, and Southeast, specifically.

Redistricting is a big reason Hollis French is now running for Lt. Governor.

“When I ran for re-election this last time, I was put in a very hostile district, survived by 59 votes, most of my Democratic colleagues did not, the coalition was broken up,” he said. “So from my perspective, looking forward, the place in Alaska politics to make the biggest difference going forward is from the executive branch.”

That coalition was a group of Republican and Democratic senators that worked together. French says that in the near future, Alaskans will look back on that coalition as the “golden era” of state politics: “An era of cooperation, of compromise, of getting things done, of working from the middle, of having a fair oil tax on the books, and saving billions and billions of dollars. So it really was a remarkable era of both building Alaska and saving for the future.”

But, French says the redistricting board wanted a Senate that would pass SB21, the state’s newest oil tax bill. And it did pass. And now there’s a ballot initiative to repeal it. In his address to the Chamber, French didn’t leave any room for doubt on how he will vote on that ballot initiative.

French says a healthy oil industry is important to the state. But so is a fair oil tax, and he believes SB21 is not fair to Alaska. He says the prior oil tax system, called ACES, was historic, and made possible because a vote-buying scandal left the oil industry politically weak.

“The industry started pushing back later, when they gained political advantage,” he said. “They pushed back in 2011, when they had a governor who was willing to go along with them, but the bipartisan Senate resisted.”

After redistricting, though, SB21 had the votes.

French says it needs to be repealed if the state wants to be able to continue investing in public infrastructure, including renewable energy projects throughout Alaska.

French also disagrees with the state’s current administration about its response to Obamacare. He says there are about 32,000 health care jobs in the state now, but that could increase by 10 percent almost immediately if the state expanded Medicare.

“Statewide it’s about 4,000 new jobs. In the first three years, those are paid for 100 percent by the federal government. After that, it’s 90-10,” he said. “It’s no different than the billions of dollars we’ve taken from the federal government in building this state, in roads, in ports, in airports. Those are our federal tax dollars, going off to Washington, D.C., now paying for health care jobs in other states. It’s completely wrong.”

French touched on education funding, as well, during his presentation. He says that while the state improved funding somewhat during the most recent legislative session, it wasn’t enough.

After his presentation, French took questions. One audience member asked how French would vote on upcoming ballot measures. Obviously, French is voting yes on Ballot Measure 1 – the oil tax repeal. That one will be on the primary election ballot.

For the general election in November, French says he’ll vote yes on Ballot Measure 3 to increase Alaska’s minimum wage, and yes on 4 to require stricter regulations for any mining activity in Bristol Bay.

But, French says, he’ll vote no on Ballot Measure 2, which seeks to legalize marijuana.

He expanded on that issue during his one-on-one interview with KRBD. French, a former prosecutor, says he does favor decriminalization. But, the ballot initiative goes too far.

“It gets into all the other derivative products, all the other things that go along with that, all the edibles and so forth that I think you’re seeing some problems with in Colorado,” he said. “In my view, we should decriminalize; you shouldn’t go to jail for recreational use of marijuana. On the other hand, I don’t think Alaska is quite ready for edibles and free flowing stores and stores on Main Street. I think you need some time to adjust to that.”

French added that it might be a good idea for Alaska see how legalization plays out in Colorado and Washington State before moving in that direction.

One change in the law French would like to see right away is the repeal of Alaska’s ban on same-sex marriage. He introduced a bill during the last session to put a ballot measure in front of voters, revoking that ban. It didn’t get through the Legislature, but he says the state should take that step before the courts require it.

“This winter I was in Juneau and doing some studying, and I could see these decisions coming and I thought, it’s on me, really, as a leader, to step forward and say our state Constitution is inconsistent with the law of the land,” he said. “I’m a firm believer in marriage equality. I think most Alaskans are. I think this is an issue that most people are rapidly becoming comfortable with, realizing it’s an Alaskan value.”

“Most Alaskans are, frankly, middle-of-the-roaders. They are not extreme right, they’re not extreme left,” he said. “They just want to see a solid economy, they want to see an environment in which they can fish, and hunt, and get a job and live their lives the way they want. Those are values that cross party lines.”

French addressed other topics, as well during his visit. Here’s his take on the Alaska Marine Highway System: “It’s no different than the Glenn Highway. You’ve got to have a strong ferry system here if you’re going to have a strong economy.”

And on moving the capital: “The capital belongs in Juneau, it will stay in Juneau. I would never, ever, ever move the capital.”

And what’s on his playlist? “I listen to a lot of stuff. I’ve got some new Bruce Hornsby, who did a thing with Ricky Skaggs — really interesting combination. I like the Grateful Dead, the Rolling Stones, the Dixie Chicks. I’m kind of a mainstream person, but I do love music.”

French has represented Anchorage in Alaska’s Senate since 2002. He is running for lieutenant governor against Wasilla resident Bob Williams on the Democratic primary ballot. Alaska’s primary election is Aug. 19.