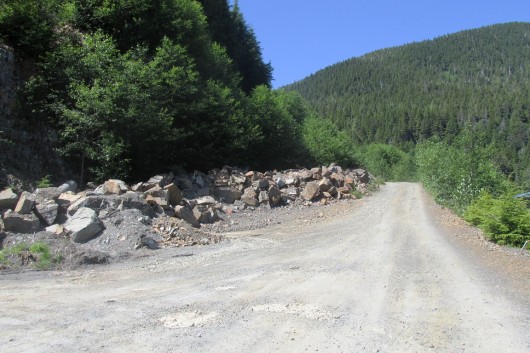 The access road leading to property under development off the Third Avenue Bypass.

A preliminary plat to subdivide undeveloped property off the Third Avenue Bypass was approved about a month ago by the Ketchikan Gateway Borough’s Planning Commission and Platting Board; but there are still some hurdles for the property owners to jump.

The commission had some conditions for Paul and Theresa Hamilton, including a review by the City of Ketchikan. The borough wants to know whether the access road currently used it acceptable and whether the city will provide fire and EMS to the sites. The commission also wants the city to sign off on construction plans for hooking those sites up to city utilities.

The problem is, the property in question isn’t technically in city limits, and the city won’t provide municipal services outside of its jurisdiction. In a memo to the Ketchikan City Council, City Manager Karl Amylon recommends annexing the property, which would allow the city to move forward with those needs.

Amylon also expressed concern about the development plans. He writes that those plans don’t adequately address surface drainage or on-site waste disposal. Both of those could affect downhill property, which include the Ketchikan Public Library and the KRBD radio station.

Amylon also writes that the access road has already been damaged by development activity, and until it has been restored or replaced, the city won’t sign off on plans to use it.

The Ketchikan City Council will consider the issue during its regular meeting on Thursday.