To fish, or not to fish 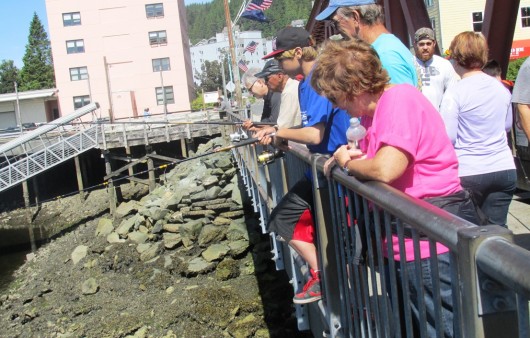 The Ketchikan City Council meets Thursday, and among the topics on the agenda is a discussion about fishing off the Stedman Street Bridge, and whether to regulate that activity.

Stedman Street Bridge is a convenient location for salmon fishing. It’s right above Ketchikan Creek, and it’s right downtown, so you don’t even have to drive anywhere to drop a line.

Byron Charles has been fishing there every summer for 20-plus years.

“I think we’re going to see a pretty good run of dog salmon. More dog salmon and probably a lot of humpies this year than anything else,” he said. “The average dog right now weighs about 10 pounds, and that’s pretty huge for a dog salmon.”

So it’s a great place to fish. But, the area also is teeming with cruise ship passengers, which means thousands of tourists stroll along the same sidewalk where fishermen fling sharp hooks and clean their catch.

Citing those issues, in 1999, the City of Ketchikan very briefly banned fishing from the Stedman Street Bridge. But, immediate public outcry led to a quick reversal of that decision – the ban lasted less than two weeks.

Now, though, 15 years later, the issue is back in front of the Ketchikan City Council. It was prompted by an email from resident Ken Arriola, who was concerned about public safety.

Arriola declined to be interviewed for this story, but in his email to the Council, he writes that the bridge has become a QUOTE “bottle-neck chaos,” complete with discarded fish guts and sometimes salty language.

But, there aren’t that many official complaints

“For the most part, we only go down there a few times a year for actual complaints involving the fishermen,” said Ketchikan Police Department Deputy Chief Josh Dossett.

He said the complaints usually are about dead fish on the sidewalk, although there was a more serious problem a few years ago, when one of the fishermen harassed people on kayak tours that went under the bridge.

“But the kayakers don’t go up the creek anymore, so we haven’t had that for several years,” he said.

Back on the bridge, his line trailing in the creek below, Charles said he doesn’t believe the City Council would outright ban fishing from the creek.

“I don’t think bureaucracy is going to overpower what’s been here in providing a service for the community. I can’t see them taking that away,” he said.

One of the concerns is congestion: The fishermen take up space, and then there’s their stuff, taking up space, too, leaving a narrow walkway for pedestrians. Charles said he’d be amenable to regulations about keeping gear off the sidewalk.

“If you take a look, they most recently completed adding on to some parts of the bridge and walkway,” he said. “Like that area there, for example, they could use that for people storing their equipment.”

Charles was pointing to one of the areas designated for people to stand and look down at the creek as a possible storage site. He added that some young entrepreneur could make a buck or two watching the fishermen’s gear.

As far as police are concerned, Deputy Chief Dossett said the department isn’t taking a position on the issue.

“We try to stay pretty neutral when it comes to doing those kinds of things,” he said. “There’s a lot of people that fish down there, and based on our experience – it hasn’t caused us a great deal of issues, but it’s pretty clear there are people who are pretty passionate about it here in town.”

Council Member Marty West placed the bridge fishing issue on the Council’s agenda just for discussion. She said she knows it probably won’t be a popular move, but that seems to be her specialty.

“People ask me to bring up unpopular causes, and I do. This is my latest one,” she said. “Someone asked me to bring it up for discussion and I said sure. I’m not even sure what my opinion is on it. I’m interested to hear what other people think. If there’s a good reason to ask people not to fish off the bridge, so be it. If not, so be that.”

The City Council on Thursday also will consider a contract with Three Dog Construction to demolish the raptor center portion of the Deer Mountain Hatchery. That city-owned building was operated by Ketchikan Indian Community, but the Southern Southeast Regional Aquaculture Association is taking over. Part of the operating agreement was removal of KIC’s former raptor area.