For the love of welding 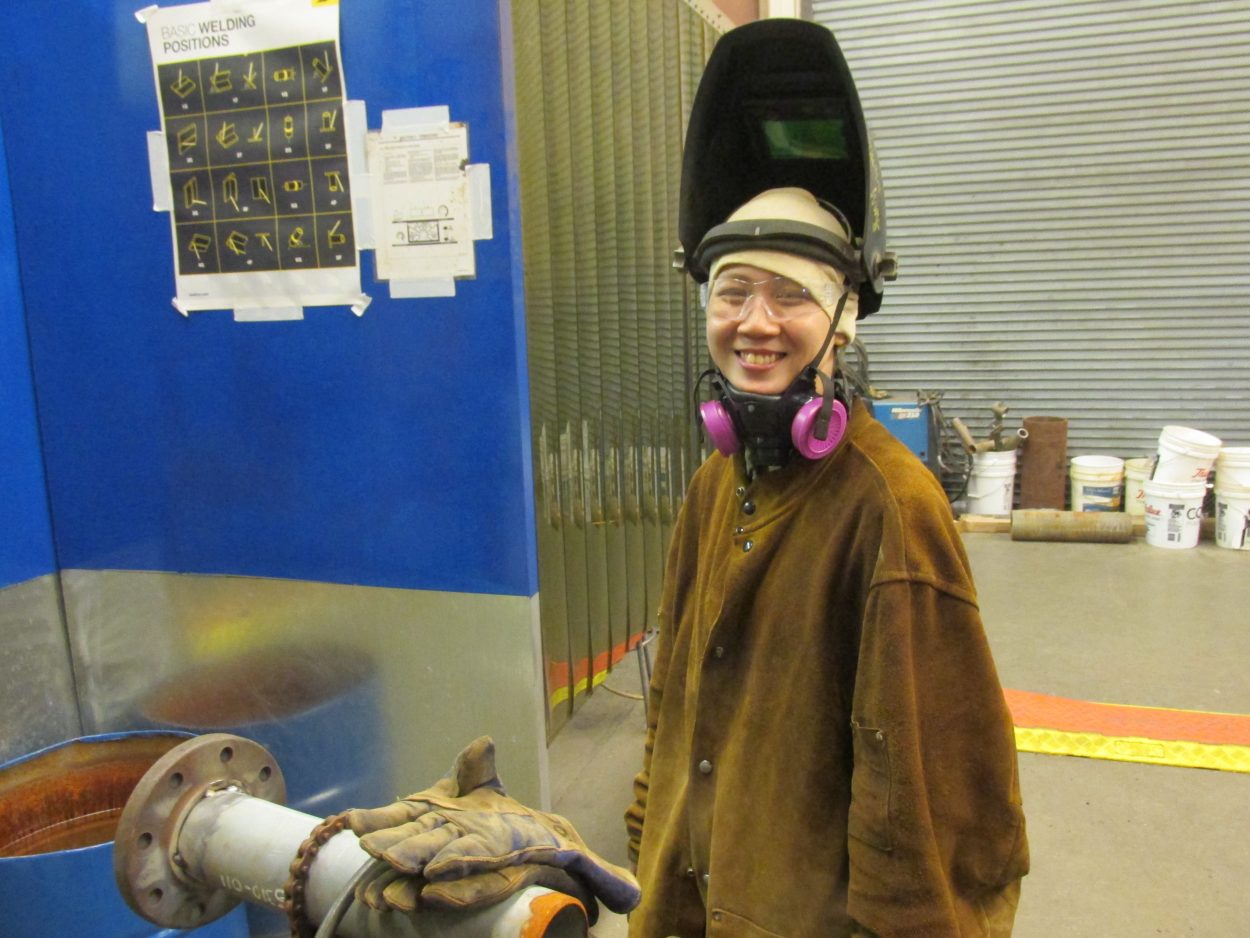 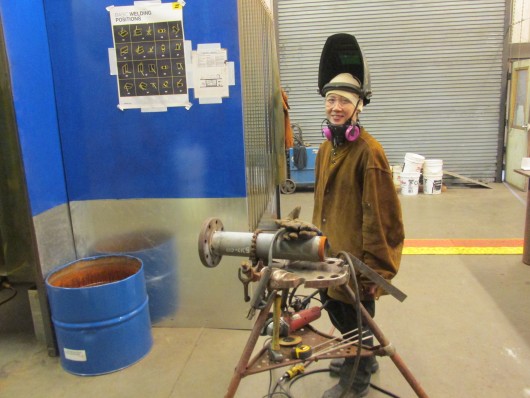 Cat Wong, 25, moved to Ketchikan from Singapore with the hope of getting a job at the shipyard.

There are more than 100 people employed at Ketchikan’s Vigor Industrial Shipyard. Out of all of them, Catherine “Cat” Wong might have the most unusual story about how she got there.

The 25-year-old is a pipe fitter and welder. She was born in the US, but grew up with her family in Singapore. When she was 21, Cat made an unusual choice, and ended up in Ketchikan.

On a recent afternoon, Cat Wong is welding a pipe for an Alaska Marine Highway ferry. She’s 5 foot 2 and her thick work jacket and boots look like they were made for someone twice her size.

Cat says, back when she was 18, she never would’ve guessed she’d end up here. She was working two part-time jobs at a bar and a restaurant in Singapore, hoping to become a restaurant manager.

“It just got to the point that I needed a full time job cause I was working long hours as a part timer,” she said. “So I just sent out my resumes to whatever companies would hire me. A company hired me in Singapore. And it was an industrial training center for construction workers, and I was an admin assistant.”

Cat hated sitting at a desk all day. But that job was actually what put her on the path to shipyard work. She started to get interested in skilled labor, like welding and maritime trades. The more research she did, the more interested she became. 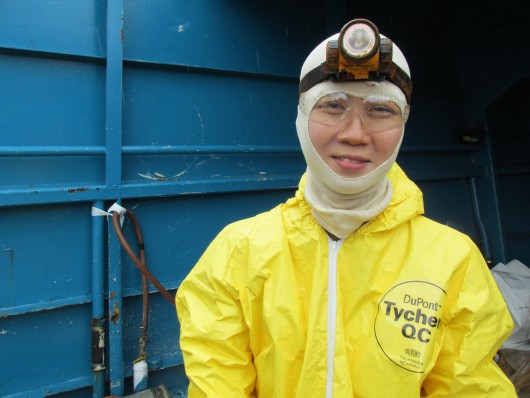 Cat wears a Tyvek suit while cleaning out a fuel tank on a crab fishing boat.

“It was a conversation I had with my family,” Cat remembers. “And my mom wasn’t too sure about it. It was like, your office worker daughter wants to work in a shipyard? Wants to learn welding? They thought I went off the cliff or something. They thought I lost my mind. I mean my mom didn’t really think I lost my mind, some of my friends did. They were like, “What? Are you serious? Cat, are you serious?” I’m like, “Yes, I am…very serious.”

Cat decided to sign up for a welding class. But the industrial training center where she worked wouldn’t take her.

“They thought I would get hurt…Women….welding…fragile,” she said.

So she went to a different center, and they were hesitant to train a 20-year-old woman as well.

“[They said] “You’re a girl you can work in an office.” It made me more determined. I was like “here’s the money do you want it or not?””

They took Cat’s money and she took the welding class.

After that, she tried to apply to skilled labor jobs in Singapore, but realized the chances for a good-paying gig were slim. But she had another option: because she was born in the US, Cat was an American citizen. In Singapore, you’re not allowed to hold dual citizenship. Cat could choose to give up her Singapore citizenship and move the US.

She gradually realized that was her best option. So, a month after her 21st birthday, she went to the immigration office and handed over her Singapore passport.

“It was sad,” she said. “And then I realized if you keep staying in your comfort zone you don’t know what you’re capable of”

And then, the US job search. With the help of Google, Cat decided the Ketchikan shipyard looked promising. And she realized the only way she would get hired is if she went there in person.

So she left Singapore, and moved to Alaska, her future riding on the hope of a job at the shipyard. She arrived in late October 2011 on a day the wind whipped the rain sideways.

After she settled in, Cat started showing up to the shipyard .

“It was daily process of coming here every morning, writing my name in the log book just to show that I’m here,” she said.

Cat applied for jobs and signed up for an advanced welding class at the University of Alaska Southeast. And then, about two months later, she got a call from Troy Tacker, a shipyard supervisor.

“And then I got a call from Troy asking, “Are you interested in an interview?” I’m like, “Yes! When do you want me to come in? Tomorrow?””

“It was very interesting,” Troy Tacker remembers. “She’s a super intelligent young lady. And she was just looking for somebody to give her chance. All she wanted to do was work in a shipyard and I thought why not?”

“And then I think I waited for a week or two weeks later,” Cat said. “And then he called me and told me, “Go to TSS for a drug test and report at 8 o clock,” And I’m like “Okay! I’m not unemployed I’m so happy!”” 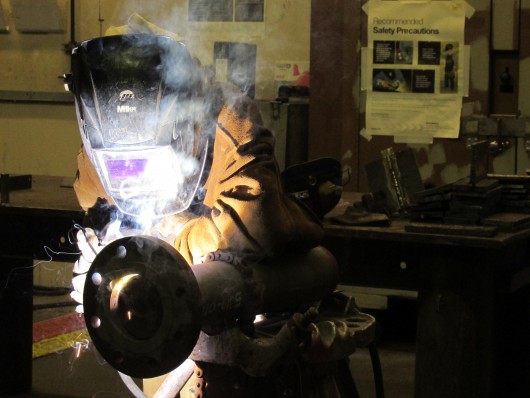 Now Cat has been there for two and half years learning nearly every aspect of ship repair. She’s paid $20 an hour. More than a year ago, her mother and brother moved to Ketchikan from Singapore, and her brother, Felix, also works at the shipyard.

So, in a matter of about five years, Cat went from a bartender and office assistant in Singapore to a pipe welder in Alaska. When she thinks about how drastically her life has changed…

“I’m a churchgoer,” she said. “And I have faith in God. My mom and I we did some praying on it. And we kind of felt the prompting that I have to leave my comfort zone to see how God would pull you through.”

Cat says her story shows that if you just put one foot in front of the other, eventually you’ll climb a mountain. Or in this case – end up in an Alaska shipyard.