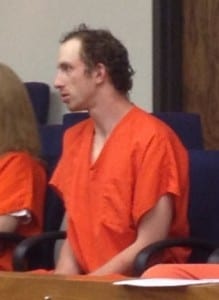 Matthew Martinez is seen in court during his June arraignment.

A 30-year-old Ketchikan man who was charged in mid-June with felony assault, terrorist threatening, weapons misconduct and violating his conditions of release pleaded guilty Tuesday to the assault and weapons charges.

In return for the plea, the District Attorney’s Office has agreed to drop the other two

Tuesday’s plea agreement also recommends no more than one year to serve on the assault charge, and no more than 30 days for the weapons charge.

Judges are not bound by those recommendations, but they rarely choose to go against them.

Superior Court Judge Trevor Stephens informed Martinez that the agreement doesn’t include any limit for suspended jail time. Martinez responded, “The more the better. More incentive for me to do right and stay clean.”

Stephens accepted the plea agreement, and set a sentencing hearing for 1 p.m. Sept. 30.

The charges stem from a June 10 altercation when Martinez called 911 and allegedly threatened to shoot anyone who walked past his home on Schoenbar Road. A section of the road was closed while police talked Martinez into surrendering. Nobody was physically harmed during the incident.