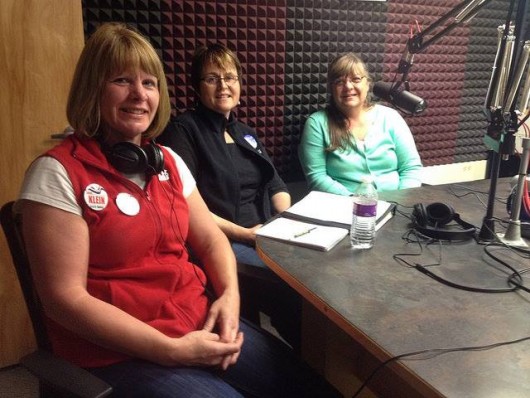 Chere Klein, Agnes Moran and Patti Mackey prepare to go live on air for a candidate forum on KRBD.

The Republican candidates for House District 36 sat down for a live call-in forum at KRBD Tuesday. Chere Klein, Patti Mackey and Agnes Moran talked about various topics relevant to the region, as well as statewide issues.

The three Republicans are philosophically very similar. They all plan to vote against Ballot Proposition 1, an initiative to repeal the state’s recently adopted oil tax. That measure is on the primary ballot on August 19th.

All three candidates plan to also vote no on initiatives that will be on the general election ballot in November. Those are a measure to legalize marijuana, another to raise the state minimum wage, and a third to limit mine development in the Bristol Bay area.

Because they do seem to agree on the issues, we asked the three candidates what sets them apart.

Moran said she is a better candidate because she has served in elected office as a member of Ketchikan’s Borough Assembly. She said she knows the issues, and is especially knowledgeable when it comes to state funding for education.

“And I’ve done the work on the local level that a legislator would do on the state level,” Moran said. “And I think I’ve been a very effective borough assembly member, otherwise I don’t think I would be the top vote getter locally when I’ve run for re-election.”

“That’s a huge part of what can make you effective,” she said. “I’ve built up quite a few of those relationships. That’s the difference between us. We’re all pretty well philosophically about the same.”

Mackey, who is the executive director of the Ketchikan Visitors Bureau, said she has traveled to Juneau many times to lobby for the visitor industry. She said she also has been active in the Ketchikan legislative liaison.

“Throughout those opportunities, I’ve had the chance to make the acquaintance of legislators throughout the state, many of their staffers,” Mackey said. “I’ve worked with many administration officials.”

Mackey said those relationships will help her succeed as the House District 36 representative.

The three candidates will be on the Republican primary ballot on August 19th. The winner of the primary race will face Dan Ortiz of Ketchikan in the November election. Ortiz is running as an independent.

The entire one-hour forum is posted below. A more detailed news story from the forum will air during Wednesday’s Evening Report.