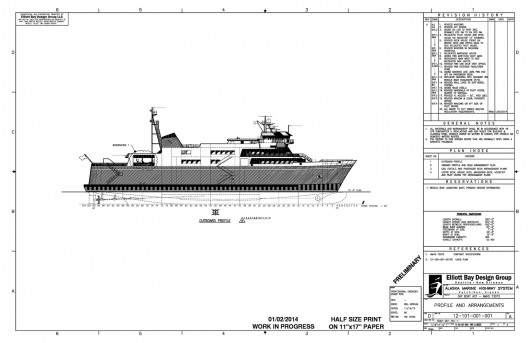 The Alaska Department of Transportation has released a Request for Proposals to the Ketchikan shipyard for construction of the Alaska Class dayboat.

Ketchikan’s shipyard is operated by Vigor Industrial, which has been working with the state on designing the new, smaller ferries. Two new ferries are planned, and will be used to serve the Lynn Canal route between Juneau, Haines and Skagway.

Woodrow says that through the construction manager, general contractor process, Vigor gets first dibs on responding to the RFP.

“This RFP goes to only Vigor. It’s not disclosed to any outside agency or company, it’s not even disclosed to the public,” he said. “It’s for them to review, as part of the contract that we have in place with them.”

Vigor officials now have three weeks to review the documents and respond to the RFP.

“From there, the department will review the response and if both parties are in agreement, the contract may be awarded sometime early September or to the second week of September,” Woodrow said.

Doug Ward is Director of Shipyard Development for Vigor’s Ketchikan operations. He said Vigor anticipates a notice to proceed with construction by the end of this month.

“The way that’s scheduled for production, the majority of production will really get underway in January, but there will be at least one module fabricated by the end of this year, so activity can pick up on that fairly quickly, pending notice to proceed, which we anticipate in August,” he said, speaking to the Borough Assembly on Monday.

State officials have repeatedly stressed that they want the ferries to be built in Ketchikan, as long as the bid comes in within the stated $114 million budget.

When completed, each Alaska Class dayboat will carry up to 300 passengers and about 50 vehicles.