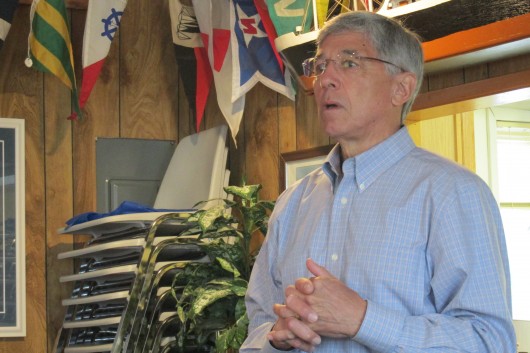 Byron Mallott spoke at a breakfast held by District 36 Democrats at the Ketchikan Yacht Club.

Mallott visited Ketchikan Friday as part of a campaign tour through Southern Southeast Alaska. He traveled to Metlakatla for Founder’s Day Thursday and planned to visit Craig, Klawock and Hydaburg on Prince of Wales Island over the weekend.

In Ketchikan, he spoke to about 15 people at a pancake breakfast organized by District 36 Democrats.

Mallott told his audience first about his background. He is Tlingit and was raised in the small Southeast village of Yakutat. He attended boarding school in Sitka, because there was no high school in Yakutat at the time. He talked about what he learned growing up.

“The value of educational opportunity, the need for folks to themselves become engaged in order to build community,” Mallot said. “The realization that Alaska is an incredibly diverse place. Very, very different from one part of this immense land to another. That in order to ultimately build this place in a way that embraced every Alaskan would take work, it would take reaching out, understanding, communication.”

Mallott says he thinks gubernatorial leadership in the last decade has withdrawn from the voices of Alaskans. And in turn, Alaskans have become apathetic with the government.

“I want to take back Alaska from the path we’re on,” he said. “To work with Alaskans across the state and say ‘your voice will be heard.'”

Mallott emphasized a few areas that he wants to reform. He wants to lower energy costs, improve the public education system, and strengthen the economy. Mallott says he would vote to repeal Senate Bill 21 – the oil tax structure passed by Gov. Sean Parnell – because he doesn’t feel Alaskans were able to have a voice in that bill.

When an audience member asked about the Affordable Care Act, or Obamacare, Mallott said the “first act” he would take if he is elected would be to allow for Medicaid expansion in Alaska.

Another first step? To appoint a “high-ranking” official to work on solutions for lowering energy costs in the state. Those were some of the only specific actions Mallott says he would take as governor.

On education, he says he would want to create a process that involved more public input.

“You can’t leave a voice that wants to be heard on any subject out,” he said. “Because it begins to corrode the entire process.”

Mallott is running in the primary election for the democratic nomination. That election is August 19. If he wins, he’ll face the Republican nominee and Independent candidate Bill Walker. While in Ketchikan, Mallot planned to meet with the Borough manager, school superintendent, and Vigor Industrial shipyard representatives.