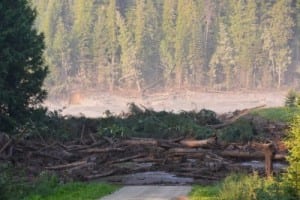 The British Columbia Environment Ministry says water that poured out of a massive mine-tailings pond Aug. 4 appears to be safe.

Some tribal and environmental groups on both sides of the border doubt the test results. They say polluted water could damage salmon runs on the Fraser River, which enters the ocean at Vancouver.

Some of those fish swim north to Alaska. And a smaller Fraser River run could change Pacific Salmon Treaty allocations, reducing Alaska’s catch.

The central British Columbia open-pit copper and gold mine is owned by Vancouver-based Imperial Metals. The corporation plans to open the similar Red Chris Mine this year near the Stikine River, which ends near Wrangell.

The Environment Ministry says early tests showed levels of dissolved metals and acid are within government standards. It says the levels are also within limits that protect fish and other aquatic life.

But ministry officials say further tests are needed. It also says the tests could not measure all dissolved metals.

Critics say the province’s water-quality standards are too weak. They also say metal concentrations that don’t kill salmon can still disrupt their senses, making it difficult to find their spawning grounds.

The area affected by the dam break is home to a large sockeye fishery. The run is just starting and will peak in several weeks.