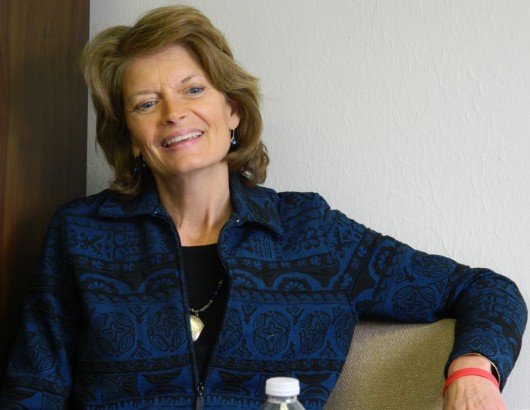 Sen. Lisa Murkowski visited Ketchikan on Friday, part of her summer recess tour around the state. She sat down with local reporters to talk about some recent issues, including the potential effects on Alaska of a mining dam breach in British Columbia; and her disagreement with Sen. Mark Begich over an advertisement his re-election campaign has been running.

News of a dam breach from a massive mine-tailings pond just 400 miles away from Ketchikan made some people in this area nervous. Murkowski said she also is concerned, and has contacted Secretary of State John Kerry.

For proposed mines still under development in British Columbia, Murkowski said she would like the Canadian government to consider a peer review process.

“It requires a more holistic view of the impact of mines, not just on the mine itself, but in the terms of environmental impact, in terms of impact downstream that could have the potential to impact the fisheries,” she said.

Murkowski said a coalition of Southeast Alaska groups concerned about transboundary mines worked with her on a letter to Kerry last winter. She said the response was that his office would have some meetings on the topic.

“At this point in time, we don’t know whether any meetings were held,” she said. “So that is one of the things we’re inquiring right now. To see to what extent the State Department has been engaged, and to put a sense of urgency to what’s going on.”

Murkowski’s disagreement with Sen. Mark Begich’s campaign has been in the news recently. Her office sent a cease-and-desist letter, asking the campaign to stop using her photo and her name in advertising.

She said that in politics, there’s an understanding that you run on your own record unless someone has agreed to endorse your candidacy.

“And I have made very clear and very public that while I have not weighed in on the primary in terms of picking a Republican, one over the other, I intend to work very hard to get a Republican in this Senate seat,” she said.

In addition to the letter, Murkowski said she also very recently talked in person to Sen. Begich about the issue.

“I was sitting in 3A and he was sitting in 3B on Alaska Airlines Q400 – the Q400 are the Horizon-size jets – so you know, you’re like shoulder to shoulder,” she said, but she’s not sure whether the message got through.

Speaking of election issues, Murkowski, who is the ranking Republican on the Senate Energy Committee, said she is voting no on Proposition 1, the oil tax repeal on the Aug. 19th primary ballot. She said the new oil tax plan should be given a chance to work.

“I think we are seeing the positive benefits of that reform package translate into increased jobs, increased activity, increased commitment from the producers to move us in a direction where we’re going to see increased production,” she said.

Murkowski said she wants to see the pipeline full of oil, rather than half-full. She added that while the oil does belong to Alaskans, it doesn’t do the state any good until it’s taken out of the ground.

Alaska is in a more competitive environment than in the past, and Murkowski said the state needs to react in a way that attracts producers.

“I don’t know whether SB21 is the perfect configuration for our tax regime and structure. But I do know that what we have seen in the past half-dozen months is an uptick,” she said. “We’re seeing numbers that in my view are translating into activity. That activity translates into production. That production translates to revenue. I think that’s good for the state; I think we should give it a chance.”

Another bill that Murkowski had wanted to give a chance was the Senate’s consideration of a measure that would have reversed the Supreme Court’s Hobby Lobby decision. Citing religious concerns, that decision allowed Hobby Lobby, a chain of craft stores, to limit the kinds of contraception allowed through its employee health insurance plan.

Murkowski said she voted to bring it to the floor for discussion, because it’s an issue she cares about.

“I don’t like abortion. I don’t think anybody likes abortion. I think one of the better ways to lessen the number of abortions in this country is to not have that unwanted pregnancy in the first place, and to have access – affordable access – to contraception is something that takes us in that direction,” she said.

So, while she didn’t support the Hobby Lobby bill as it was presented, Murkowski said she wanted the Senate to have the debate. The vote to bring it to the floor, however, failed.

Murkowski also talked about the immigration crisis, and said she’s disappointed with the solution brought forward by President Obama’s office. And in regards to the upcoming election, Murkowski is optimistic that the Senate will end up with a Republican majority.

“Republicans need to pick up six seats, and it’s getting better every day,” she said.

And if the GOP does take majority control of the Senate, Murkowski is first in line to chair the energy committee.

Murkowski is due back in Ketchikan on Wednesday, when she will be attending a press availability at the Coast Guard base with the U.S. Coast Guard commandant.