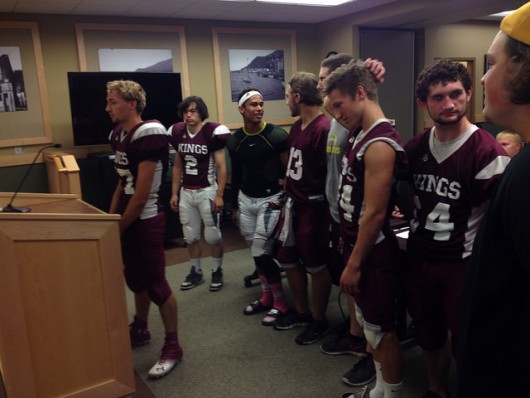 Members of the Kayhi football team made a case for their game against Seward to the School Board.

Football players filled the room at the Ketchikan School Board meeting on Wednesday evening. The Ketchikan High School team was there because of an apparent funding issue that has put one of their three home games of the upcoming season in jeopardy.

The funding details of this is were unclear at the meeting. What was clear is that the Kayhi football team is upset.

Here’s what they’re facing: the team has eight games scheduled this season. Just three of those are home games, and one was supposed to be against Seward.

Terie Hicks, a mother of one of the football players, presented a document she said is from Ketchikan School District Activities Director Ed Klein. The document said the Seward team was budgeted $8,000 for travel to Ketchikan. Hicks said she was told that the Seward team will not be coming here because they found out they are receiving only $4,000.

“We cannot afford to lose this game and further reduce this season down to two games,” Hicks said. “That’s not acceptable.”

Again, at this point it’s unclear why there is a funding disparity or if there even is one. But all of the School Board members agreed that whatever the problem, they wanted to fix it. Here’s Stephen Bradford.

“It sounds to me that [Kayhi football] met their end of the deal, they were working off the budget provided to them,” School Board member Stephen Bradford said. “I think it would be a shame for us as a district to change something along the way and not honor our end of it…We need to get these kids that game.”

Several football players made their case to get back the Seward game.

“We need this game. For all of us,” said freshman Cody Malouf. “We’ve all worked hard in the classroom to be able to play in this game, and if this game doesn’t happen that’s just completely unfair.”

“It’s just crazy all the hard work this team has put in,” said senior Noah Silva. “It really hits me deep in my heart because these kids, their family to me. We’re all family, we’re all brothers and we want this game to happen.”

If the game doesn’t happen, and the team only plays seven games, they won’t be eligible to compete in the state tournament, like they did last year. Superintendent Robert Boyle said he would talk with Activities Director Ed Klein about the apparent funding issue.

Once the team left to get back to their practice, School Board member David Timmerman made a football-related proposal.

“I’d like to make a motion to direct the superintendent to seek a $10,000 budget appropriation from the [Ketchikan Gateway] Borough for safety and training equipment for the Kayhi football team,” Timmerman said.

Timmerman referenced a $10,000 grant the Ketchikan Borough Assembly made to the Kayhi science department outside of the FY ’15 budget. He said people from other departments in the school district have come to him asking how they can get extra grants for their programs.

“Because of this one singular incident, perceptions about how we should go about this are unclear,” said School Board President Michelle O’Brien.

Timmerman said the Kayhi football coach came to him with a proposal for new safety and training equipment. Timmerman argued that the School Board should vote on whether to direct Superintendent Robert Boyle to request the funds from the Borough. But a couple members were hesitant about throwing the vote onto the agenda without time to let the public know about it. O’Brien made the final call.

“We have made a point of asking for processes to be followed, now it’s time that we follow a process that we have in place,” she said.

The Board plans to hold a special meeting this Friday at noon to vote on whether to ask the Borough for a $10,000 budget appropriation for Kayhi football safety and training equipment.

The Board also approved a six-year Capital Improvement Plan to submit to the state. The plan includes security upgrades, a biomass boiler, and an emergency generator for Kayhi, and a roof replacement at Houghtaling.

After the special meeting Friday, the next School Board meeting is scheduled for August 27th.