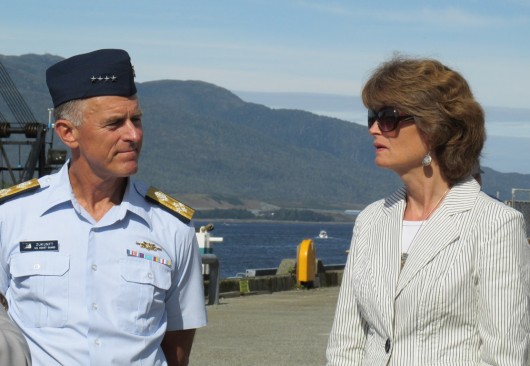 The newly appointed Commandant of the U.S. Coast Guard, Admiral Paul Zukunft, was in Ketchikan Wednesday to meet with personnel and tour the local facility.

He was joined by Alaska Sen. Lisa Murkowski for the site visit, and both paused for a few minutes on one of the Coast Guard’s docks to talk with local media, while construction on a new sea wall continued nearby.

Zukunkft said Alaska is an area where the Coast Guard presence is growing. 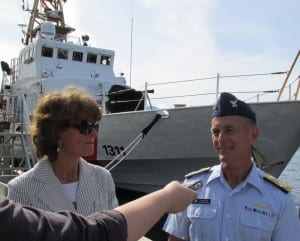 “So I want to see firsthand as the commandant of the Coast Guard any challenges that we may have,” he said. “It’s encouraging to see the progress being made at this facility that will bring in two fast response cutters that will permanently make their home here in Ketchikan.”

Ketchikan’s Coast Guard base is building a new pier and support building to homeport the two new cutters, which are due to arrive next year.

Zukunft talked about the need for additional capacity for Coast Guard operations in Alaska, particularly because of increasing activity in the Arctic.

The admiral added that maintaining current service, especially safety of life at sea, is important to the Coast Guard, and they try to use the resources wisely, and maintain what they have. He pointed to the patrol boat tied up to the dock.

“The 110 behind me had a service life of 20 years. It’s now approaching its 35th year of service,” he said. “With a modest investment, we take very good care of what we have.”

But, Zukunft said, the Coast Guard has only one heavy ice breaker now, which limits its ability to operate in the Arctic.

Murkowski said Congress has an obligation to meet the requirements of an Arctic nation, but has failed to provide adequate funding.

“We need to do our job in Congress to make sure … they (the Coast Guard) have the financial resources to do the job that we’ve tasked them to do,” she said. “It’s a heavy lift right now, because of budget considerations. They will do everything that they can, but we in Congress and the administration need to give them the resources to fulfill that mission.”

Zukunft stopped in Ketchikan on his way to an event in Anchorage. He was appointed as the 25th U.S. Coast Guard commandant this spring.