From Calif. to Gustavus, by foot and kayak 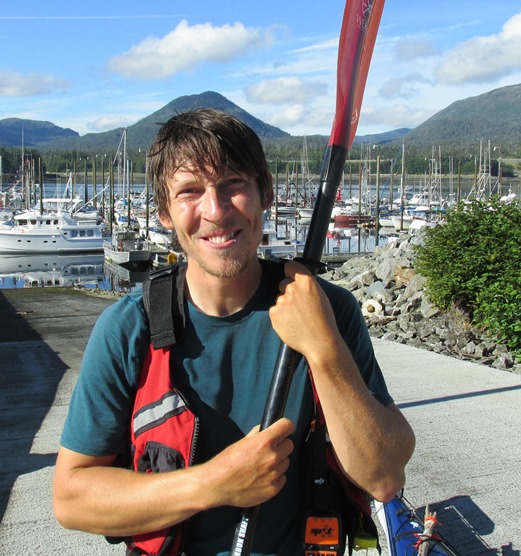 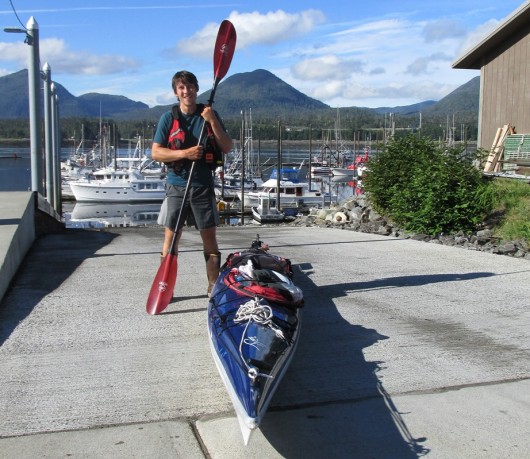 Zachary Brown stands with his kayak at Bar Harbor before continuing his journey home to Gustavus.

If you’re boating through the Inside Passage between Ketchikan and Gustavus in the next few weeks, keep an eye out for Zachary Brown. He’s kayaking north through the Alexander Archipelago, the final leg of a journey that started in Northern California. Brown made a pit stop in Ketchikan recently, and we caught up with him at Bar Harbor, as he prepared to resume his trip.

Zachary Brown is headed home from college. It’s a journey many graduates take, but in his case, it’s taking a little – no, make that a lot – longer. Brown earned his PhD in oceanography from California’s Stanford University. It’s from there that he started his journey home – on foot — to Gustavus, in Southeast Alaska.

Looking at a map, you can see it would be pretty much impossible to walk all the way to Gustavus, a small community northwest of Juneau. So, after about 55 days on foot, Brown ended the walking portion of his journey in Port Angeles, Wash., got into his kayak and started paddling.

One goal of the trip is to have a big adventure, and get back into the Alaska lifestyle that Brown grew up with. But the journey serves another purpose.

“A big part of it is to try to start a field school near where I grew up, near Glacier Bay,” he said. “There’s this really special property out there on this remote group of islands called the Inian Islands.”

The five-acre property is called the Hobbit Hole, and Brown said it’s a beautiful spot that’s always been special to the residents of his home town. It’s for sale, and he’s working with a team from Stanford to buy it and turn it into an area for students, researcher and local residents.

“So yeah, that’s part of why I decided to do this big trip is to spread the word about that and look for our sugar daddy as it were to help us buy that special property,” he said.

When asked whether he’d had any luck with that, Brown said, “I’ve met a tremendous number of people and handed out a few hundred cards. No luck with the big fish yet, but there are a lot of connections percolating, so you never know.”

Quite a few of those connections were made on the walking portion of the journey. He hiked along the coastal highway most of that way, rather than on trails.

“Because I figured, it’s a shorter distance for one thing but also, going along the coastline, you’re passing through a lot of communities, meeting more people,” he said. “It’s not exactly a wilderness experience, in fact I’d say a good half of that 1,000 miles was right along the shoulders of the highway.”

And some people driving by offered to give him rides.

“I had a few days of just total pouring rain and these wonderful nice people would stop and say, ‘Hey do you need a lift?’ and I’d say, ‘No. I gotta walk. I can’t cheat this thing. I gotta walk all the 1,000 miles.’”

Was he tempted, though?

Brown started paddling about a month ago, and hit Ketchikan on Day 91 of the epic journey. He’s seen some amazing sights on the kayaking portion of the trip.

“When I was just about to cross into Alaska, I was sitting in a little inlet, watching eight 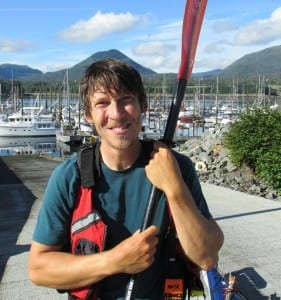 Zachary Brown stopped in Ketchikan during his walk/kayak trip from California to Gustavus.

humpback whales bubble-net feeding for over an hour,” he said. “They would come up all at once, and then you’d see all their eight flukes go down. All kinds of haunting, beautiful noises coming from them.”

Brown also saw his first bear of the trip soon after crossing the Alaska border, and a wolf. One of his wilder encounters, though, had nothing to do with wildlife.

“I was right in the path of one of those giant ferries in British Columbia at one point,” he said.

Brown was crossing close to Nanaimo on Vancouver Island, and wasn’t sure at first whether the ferry was headed his way.

“And suddenly I started paddling furiously. Then there were four long horn blasts that I knew were for me,” he said. “I just barely got out of the way in time.”

That’s not to say that Mother Nature didn’t also throw some challenges his way. Brown hit the Alaska border just in time for a big two-day storm. The tempest was just kicking in, and he still had a two-mile crossing in front of him to get to the Alava Bay Cabin.

“Getting across that two miles was a little hairy. It was choppy, waves were coming over the bow of the boat,” he said. “That’s the thing about being out, alone. You don’t have this group decision-making process about whether the conditions look right or wrong. You have to use your own judgment. There’s nobody else to act as a safety net.”

Speaking of safety, Brown is prepared in case he gets into trouble. He has a Spot GPS that allows people to track his progress online. Through that, he sends a check-in every night, to let his mom know he’s OK, and he can send an SOS if he gets into trouble. Brown also has a VHF radio and a satellite phone.

“So, I’m pretty well covered when it comes to communication. I feel like even if I do have to ditch, if I somehow get separated from my boat, these things are connected to me on my PFD,” he said. “So something pretty bad would have to happen for me not to be at least able to be saved.”

So far, the trip has not involved any dangerous mishaps. In fact, the only time he had to bail out of his kayak was when he first started paddling from Washington, in full view of well-wishers watching from shore.

“Which was actually pretty embarrassing,” he said. “I was in Port Angeles. I had a whole group of six or eight friends who came down to see me off on my triumphant transition from the walk to the paddle.”

Brown launched, turned to give a big wave and noticed his water bottle had fallen into the surf. So, he went back to get it but then caught a wave and flipped. Brown couldn’t roll the kayak upright because it was too shallow. So,

“I fumbled for my spray skirt handle and I bailed out and I was just hanging my head in shame because my triumphant departure was completely ruined,” he said.

Since then, though, Brown has managed to stay in the boat.

The trip up the Canadian coast includes a lot of wilderness, but Brown said he’s found some pockets of humanity along the way.

“The lighthouse on Addenbrooke Island, the caretakers there, they used a crane to hoist my kayak up onto the dock and took me in for the night,” he said. “The hospitality has just been tremendous.”

Brown also stopped at an old, falling-down cannery where the caretaker let him borrow a fishing pole to go trout fishing.

Those human encounters have been few, though, and Brown has spent a lot of time on his own.

“It definitely gets lonely. No question about that. I have a lot of time to think; almost too much time to think, sometimes,” he said. “But it’s incredibly rewarding and enriching at the same time. I know that before long, I’m going to be back in the real world and real life.”

Brown estimates that his re-entry into the real world will happen around the first of September, when he expects to land back home in Gustavus.

To follow Brown’s progress online, and find out more about the field-school project, click this link: http://inianislandsinstitute.org/