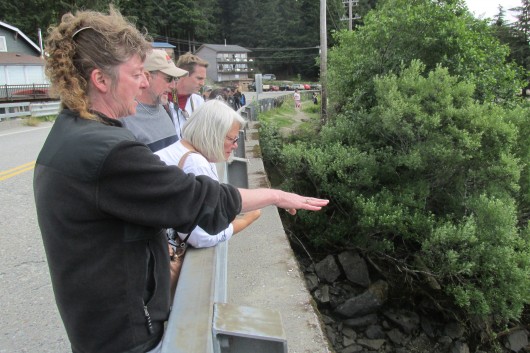 Earlier this year, the Ketchikan Borough Assembly established new rules for tour operators in Herring Cove. Using the borough’s economic development powers, the Herring Cove Tourism Management Program puts regulations on tour operators that do not exist anywhere else in Ketchikan. It’s an attempt to tame the mess of thousands of people and dozens of vehicles that visit the area each day during the summer for wildlife viewing.

On a recent weekday morning, Sourdough Tours guide Laurie Weller is leading a group of about 20 cruise ship tourists onto the shoulder of the South Tongass bridge.

“Like I said, I don’t know if everybody heard it, since we’re gonna be walking on the road, stay on this side of the white line,” Weller said, indicating to the shoulder. “Do not go out on the road.”

The bridge is a highway. And it’s also one of the most popular wildlife viewing spots on the island.

“Ok everybody in a group, let’s cross the street, quickly!” Weller instructed the group, as they crossed from one side of the road to the other. “There’s more room on the other side of the white line over here.” 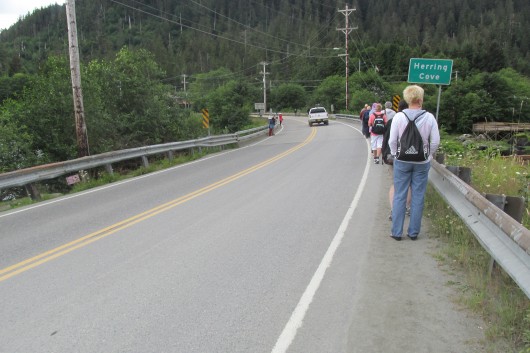 Tourists walk onto the shoulder of the bridge at Herring Cove.

Weller has been a tour guide for Sourdough tours for 14 years. She says she doesn’t see any negative impact from the new rules.

“I don’t think it’s really affected us at all,” Weller said. “I think it’s great that the rules are so strict, we’re more careful about keeping people off the street.”

Starting this summer, the borough requires every tour company that brings visitors to Herring Cove to read and sign a list of regulations. Only then can they get the certificate and vehicle permit allowing them to bring people here and park.

Seventeen tour companies went through the steps to get certificates. But how is it actually affecting the day-to-day in Herring Cove?

First, here are the new rules: no stopping or parking vehicles on the bridge. No walking in the driving lanes. People are allowed to walk and stand on the narrow shoulder on each side of the bridge. Tour operators need to designate where they’re going to park in a commercial or industrial parking area. And they can’t drive down Power House Road and park at the end. The state Department of Transportation also lowered the speed limit on the bridge from 45 to 25 miles per hour.

Let’s get back to Laurie’s tour.

“Ok as we’re walking down this dirt road, please stay on the road. If you go off the road, you are on private property. Some people will charge you 2 dollars a head to walk on their property, other people will just yell at me.”

She’s leading them down Power House Road. We walk past “private property – no trespassing” signs. 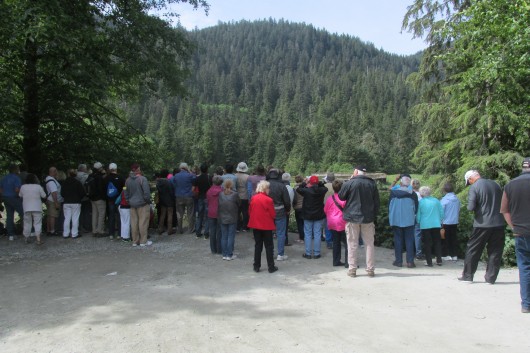 Tourists from several groups view the creek at Herring Cove from a public area on Power House Road.

As we walk, one of the tourists – an older woman – trips and falls. It takes help from several people to get her on her feet again. That’s one thing some of the tour guides don’t like about the new rules – they don’t allow larger vehicles to drive down Power House Road and park.

“Not having the freedom to let people off exactly where they want, especially if you have old people who can’t walk as well and they don’t want to walk to the end of the trail, that’s kind of a pain,” said Tuvia, a guide for Northern Tours. “It does hurt that we can’t park [at the end of Power House Road] anymore.”

Tuvia says the designated parking does make things less stressful. And he also says this…

“I really wish we could still walk on the bridge.”

He says that he was told tour guides could get fined for bringing people on to the bridge.

“I’m not sure exactly what all the regulations are,” said Danny Robb, a guide for Alaska Hummer Tours.

He and some of the other tour guides aren’t sure if the new rules have affected them, because they’re not sure what they are. Some of the residents of Herring Cove have noticed. 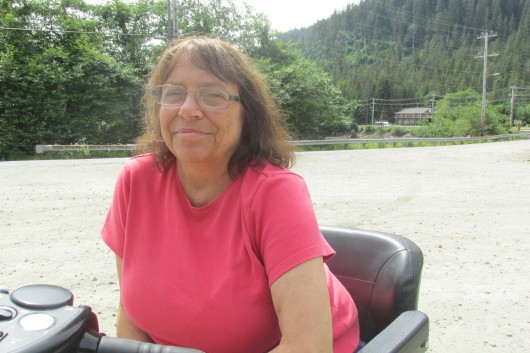 Paula Jurzack lives on Power House Road, and feels that the new rules have helped a little bit, but not as much as she hoped.

“It’s just a wild, chaotic thing out here sometimes,” said Paula Jurzack, who lives at 10 Power House Road. “They were supposed to be making changes out here…We weren’t supposed to have any buses going down Power House Road. But there are still buses going down there. People are still walking on the side of bridge, but if a bear’s there they’re all jumping sporadically across the road again.”

Jurzack says the only solution she sees to make the area safe is to build a pedestrian walkway next to the bridge.

The Borough Assembly is not planning on building a walkway in this fiscal year. The planning department says it’s something the state Department of Transportation would have to facilitate.

Meanwhile, the borough has hired two part-time tourism compliance agents to monitor Herring Cove and enforce the new rules. Borough Principal Planner Richard Harney says just having them out there is highly effective.

Marco Torres is one of the compliance agents. On a recent afternoon, he is on the bridge with a group of a couple dozen tourists and their Sourdough Tours guide.

“Behind the white line folks, thank you,” he tells them. 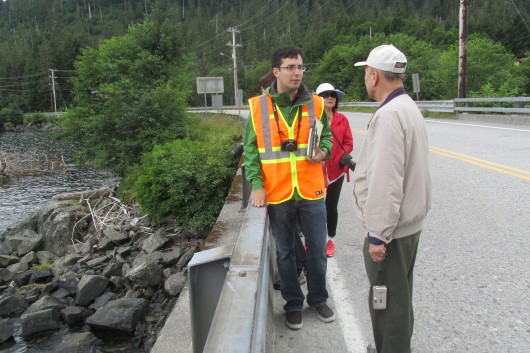 “The first responsibility is making sure people are safe first and foremost and everything kind of stems from that,” Torres said.

The compliance agents are allowed to issue citations – a $200 fine for a tour company operating without a required certificate or parking permit or a $100 fine for violating a specific requirement of the permit.

They haven’t been heavy-handed with that power. Torres says he and the other agent have filed three citations this summer for one tour company, Sourdough-Ingersoll, that was operating without a permit. One of the citations was dismissed in court. The other two are still being considered in court.

One local resident, Janet Brand, says she does not think the tourism compliance agents have made much difference.

“Nothing’s gonna work if they don’t enforce it,” she said. “Which they don’t.”

Brand has an industrial-zoned property, where she allows certain tour companies to park their buses.

Halli Kenoyer has lived in Herring Cove for 30 years. From her residence on Power House Road, she has a clear view of the bridge. She explained over the phone on a recent afternoon what she was seeing from her home.

“I see the compliance officer is waving at tourists who are leaving,” she said. “That’s about 50 people walking back. There are three tour buses that are slowed down, backed up on bridge. The compliance guards have no authority to ask people to not bring tours onto the bridge. And there can be upwards of 100 people on that very narrow shoulder. We’re talking about a six-inch shoulder.”

Kenoyer says the rules haven’t been as restrictive as some of the Herring Cove residents hoped. She understands why so many tour companies come here. It’s a phenomenal place to view Ketchikan’s wildlife. But, she wishes there was somewhere else for this to happen instead of her front yard.

The Borough Planning Department is studying the efficacy of the new rules this summer. They’ll present their findings to the Borough Assembly later this year, and make a suggestion on whether the regulations should continue next season.