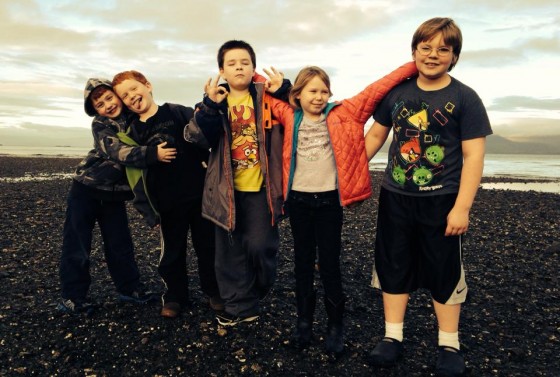 Coffman Cove students in January, during their first school year with a four-day week. (Facebook photo)

Last year, the district implemented a four-day school week in all but one school. It worked so well that every school is running on a Monday-Thursday schedule this year.

Southeast Island School District schools are tiny. Most have just two teachers and between 10 and 20 students spanning grades K-12. They’re separated from each other by miles of land, or even by water in Port Alexander’s case. With such remote, rural schools, you have to be adaptable.

“We’re trying to meet the needs of our families,” said Superintendent Lauren Burch. “I mean, you can’t have a basketball team in a school with 10 kids but you can have an archery program.”

The four-day school week is just another way the district has adapted to meet the needs of the families. Burch says the idea actually came from parents. They heard about rural school districts in the Lower 48 having success with the Monday – Thursday model.

There was some hesitation at first, including from Nick Higson. He’s principal for all of the Southeast Island School District schools except Thorne Bay.

“As educators, we have to sometimes force ourselves to embrace change,” said Higson. “I run with philosophy of if it’s not broken, why try to fix it.”

But the push to try it out grew stronger, and in 2012, Superintendent Burch attempted to get approval from the State Department of Education.

“They had many legitimate concerns about our educational program that we had to satisfy before we moved on [with the four-day week,]” Burch said. “You know, it’s counter-intuitive that a four-day school week would be successful.”

The idea didn’t pan out for the 2012-2013 school year. But for the 2013-2014 year, the school district submitted a more detailed proposal to the state, and it was approved. The next step was to get approval from the advisory councils at each school, which are made up of mostly parents.

The main concern from them? Childcare on Fridays. So, the district administration decided to organize Friday activities led by teachers or paraprofessionals.

“We do things like artist-in-residence, where we bring in an artist and they come in and do silk screening with kids,” said Higson. “Or we do swim lessons with our kids. We do a number of activities where kids get this neat enrichment opportunity on Fridays that they wouldn’t necessarily get on a block-scheduled day.”

Some families chose to spend that extra day off with subsistence activities.

“You know people do hunt and gather here a lot,” Burch said. “Hunting, fishing, mushrooms, berries. They do appreciate that time to get out and have a three-day weekend.”

“The kids, not one hundred percent of them, but a very high number of them absolutely love it,” Higson said. “It allows them to spend more time with families doing subsistence activities. It allows them to go to the DMV or the dentist or the doctor on a non-school day so they don’t miss instructional time.”

It also cuts down on days students miss to travel for sports.

The support for the 4-day week isn’t completely unanimous. Principal Higson surveyed students and parents and put their anonymous responses on the school district’s website. Most of the feedback is positive. But some kids commented that the teachers give more homework because of the extra day off or that they felt they learned more in the five-day week.

For Higson, he sees the impact of the four-day week in the test scores.

“Test data that we got back at the end of the year is phenomenal,” he said.

The scores either went up or stayed the same. Nothing went down.

What about the teachers?

“The teachers have been, I think, unanimous in support of it,” Burch said. “I wasn’t really sure how that would go either, because they’re working harder, longer. But on those Fridays, about half are work days. You can do professional development, you’re working together, you’re grading papers. And it’s created much more collaborative time for teachers to work together.”

The four-day school week hasn’t saved money for the district. With Friday activities and the slightly longer days Monday through Thursday, Burch says it actually ends up being a bit more expensive.

But the shorter week fits with people’s lifestyles in these communities, and that is what has made it stick.