Should there be limits on school enrollment? 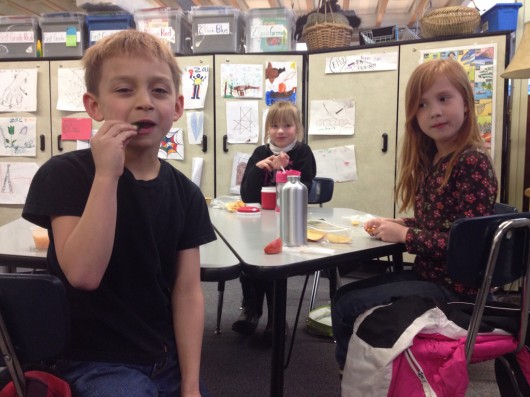 Should there be a limit on enrollment at elementary schools? That issue came up at the Ketchikan School Board meeting Wednesday night, when two Houghtaling Elementary School staff said their second grade classrooms are too full due to families who registered at the last minute.

Penny Hamlin is a Houghtaling preschool teacher and mother of second grader there. She and Houghtaling principal David Jones explained the dilemma: the school planned for two second grade classrooms this year. But a sudden increase in enrollment puts those classes at 28 students each. It’s too much for elementary school classrooms, Hamlin said.

“Increased numbers make classroom management more difficult, often resulting in more students acting out to get their teacher’s attention,” she said. “The time a teacher can spend one-on-one with a student greatly decreases.”

Hamlin asked the School Board to take action to add another second grade classroom before the start of the school year.

Hamlin and Jones said there are also intensive needs students in the second grade, some with behavioral issues, which adds an extra burden to the teacher. Everyone on the School Board seemed to agree – 28 second graders in one classroom is too many.

School starts September 2nd. Some of the School Board members urged Superintendent Robert Boyle to hire a new second grade teacher before then.

“I think it’s a failure,” said Board member Misty Archibald. “I think we have to find a solution for this before school starts.”

But Boyle said they need to get a clear grasp on the final enrollment numbers first.

This set off a discussion on whether the Board can take action to prevent crisis like these from happening in the future. Board member Stephen Bradford brought up the idea of enrollment limits.

“I just don’t think it’s fair for a student to be in a classroom of 28,” Bradford said. “But I also don’t think it’s fair to that teacher to have to teach 28 when other teachers at that same grade level at a different facility have 16. Does this Board have the guts to come up with some framework to tell families, ‘No you can’t send your child to that school you want to. We’re full there.’”

So, for example, if a parent tried to enroll their child in second grade at Houghtaling, but the second grade classrooms had reached their set limits of, say 21 students, then that parent would need to choose from other elementary schools that still had openings in their second grade.

Board President Michelle O’Brien said if they are going to look into establishing enrollment restrictions, it needs to be in the next few months. She said the way things are now, it’s not fair for the teachers.

“One of our Board goals, is it not, is to ensure the success of every student,” O’Brien said. “We can’t do that without supporting the teachers.”

“And right now we’re setting them up for failure by having such high numbers,” said Board member Colleen Scanlon.

The School Board also discussed updates to bus conduct policy and resolutions for the State School Board Association to include in their lobbying efforts.

Bradford asked the Board to consider nixing or reducing fees such as gate price that teachers have to pay, along with the public, at some student extracurricular events.

“They’re giving up family time, they’re giving up lots of other things they could be doing so that they can be plugged in and seeing what their students are doing,” Bradford said. “And I don’t think we ought to charge them for that.”

The other Board members agreed to continue with that discussion at future meetings.

At the end of the meeting, Misty Archibald explained why she chose not to file for re-election to the School Board.

“I’m gonna go back to school, I believe that strongly in education so I’m gonna pursue a graduate degree,” she said.

Ketchikan Youth Court Program Director Glenn Brown, who filed to run for School Board, will most likely take over Archibald’s seat. Board President Michelle O’Brien, who holds the only other seat that was opening this term, filed for re-election.

The next School Board meeting is scheduled for Sept. 10.