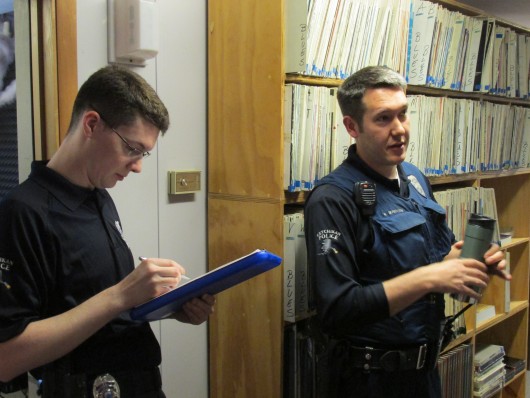 In June, the Ketchikan Police Department made safety assessments available for local businesses. They look for potential weak spots, and see how prepared a workplace might be for anything from a natural disaster to a vandalism. KRBD invited the police to come assess our station.

Ketchikan police officers Mark Sivertsen and Chris Travers say this threat assessment initiative has been in the works for about a year and a half. KRBD was the first business to sign up. The officers came by on June 24th.

“You guys are our guinea pigs,” Officer Sivertsen said.

Sivertsen says one of the main weaknesses local businesses face is a lack of preparation.

“A lot of people don’t have emergency plans in place,” he said. “What to do if somebody came in and was sick or someone was having a heart attack in the parking lot? Same thing with if somebody comes in disgruntled, they don’t know to make distance and have somebody else in the building call the police.”

Sivertsen says the idea to offer safety assessments didn’t come from any specific incident in Ketchikan. It’s about focusing the police department’s efforts more on prevention.

“We’re starting to do more of a proactive approach,” he said. “With all of the responses you see in the news of school violence, workplace violence, stuff happens at the malls and movie theaters. The training used to be, we respond to the threats, we take care of it when it happens. Now there’s a big push — and our department has made the decision that we’re gonna take more of a proactive approach.”

He says there’s a deficit in the community for this kind of service.

“We’ve had some businesses where, if they would’ve taken initiative sooner they probably would’ve prevented more loss and usually it was theft,” he said.

The assessments cover practical steps business can take to be prepared for natural, man made, environmental, and electronic threats.

KRBD’s general manager, Deb Turnbull, led the officers around the station. We can’t reveal our biggest weaknesses online, but here are a couple suggestions from the officers:

– Motion-censored lights near the entrance, so if someone walks in during the night time, the DJ will know and be able to see who is there.

We walked through every room in the station. Sivertsen and Travers asked questions and offered suggestions. In total, it took about an hour. The officers said they would write up a review of suggestions.

The written review took the officers a little more than two months to get back to KRBD. It’s two pages of notes that lays out small changes which could make the building and staff safer.

We’ve implemented one of those changes so far, and we plan to work on a few more in the near future.

Officer Travers told KRBD that so far, no other businesses have signed up for the safety assessments. If you’re interested, contact Deputy Chief Josh Dossett.