Another last-minute hire due to school enrollment 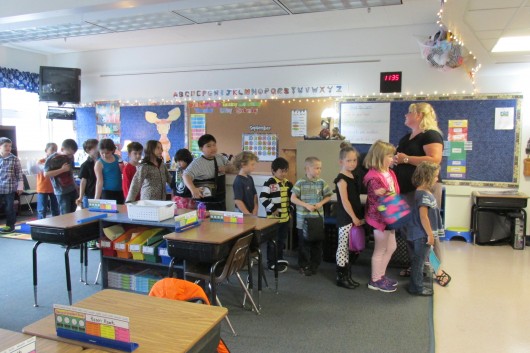 Ketchikan school enrollment has increased each year since 2010. This year, that’s caused problems for two elementary schools. At the Ketchikan School Board meeting Wednesday night, Board members approved a new teacher position at Houghtaling Elementary School and were notified of need for another teacher at North Point Higgins Elementary.

The School Board officially approved a $90,000 contract for a new second grade teacher at Houghtaling. Because of unexpected last-minute enrollments, Houghtaling was almost stuck with two overcrowded second grade classrooms. Now, with a third classroom, each should have around 20 students each.

The School Board learned that another school has run into the same problem.

“In particular concern for us is Point Higgins grade 1,” said Superintendent Robert Boyle. “We have 27 first graders at Point Higgins.”

Boyle told the Board he planned to hire another first grade teacher there, also at a cost of $90,000. He said because enrollment numbers are so strong this year, the state per-student allocation will likely pay for these new teachers.

The Board was supportive. Board member Colleen Scanlon said studies she’s read show that 18 is the ideal classroom size.

“When you start going above that 18 number, you reduce the learning ability of the child, and the ability of the teacher to teach those students,” Scanlon said. “It also has a wide effect on students that come from a lower socioeconomic environment.”

School Board members Misty Archibald and Trevor Shaw said they support adding the first grade classroom, but the school district should watch the enrollment numbers and carefully plan for the future.

“If we do some strategic planning now and kind of anticipate the growth I think we can save ourselves some heart burn in the future when it comes to class sizes so we’re not at, like at the last meeting, where we’re last minute, ‘oh no we need another teacher,'” Shaw said.

The contract for the first grade teaching position at Point Higgins will most likely be included at the next meeting.

The Board approved three resolutions to submit to the Association of Alaska School Boards to use in their legislative lobbying efforts.

The second urges legislative action requiring the Alaska Department of Education and Early Development to apply for exemption to the federal Smart Snacks program for fundraising events.

And the third addresses the huge costs Ketchikan deals with to pay for sports and other teams to travel to compete. The resolution asks the Alaska School Activities Association, the state Legislature and the Governor to work together to set up a funding pool that will help school districts fund travel for students to attend state-level competitions.

Board member Stephen Bradford proposed an amendment to the resolution – that the funding pool be available for travel of over 500 miles. That would mean it could be used, for example, for Ketchikan football to fly to play North Pole, even if it wasn’t for a state competition.

“It seems like because this great state is so large and we want to encourage interstate competition and activity, we need a funding mechanism for those of us who are on the outer limits,” Bradford said.

The School Board approved the resolution with the amendment unanimously.

At a previous meeting, Bradford brought up the idea that teachers should not have to pay gate fees at school games and events. The Board discussed that further, and most of the members came to this conclusion.

“I don’t think we should have those kind of things available unless they’re available to everybody,” Archibald said.

She said some parents struggle financially more than teachers, so why should they have to pay the gate fee if teachers don’t? The idea was dismissed.

At the end of the meeting, the Board briefly discussed the draft safety assessment of the school district conducted by Safe Havens International. Board president Michelle O’Brien was upset that the administration put the report online.

“This is on the web, in the public, [it] shouldn’t have been there,” O’Brien said. “What we’re doing in terms of exact security measures in our schools doesn’t need to be out on the web.”

“I applaud Mr. Boyle for releasing it,” he said. “I don’t think as a public-funded entity that we should keep very many things secret from the public.”

The Board didn’t talk about any of the dozens of safety improvements Safe Havens recommended in the assessment. They did mention the praise Safe Havens gave to the school resource officer program – which stations a police officer at Ketchikan High School.

The Board decided to hold a work session where Board members, school staff, police officers, and community members can talk in detail about the draft assessment and what steps to take based on its recommendations. That session is scheduled for Oct. 1.

The next School Board meeting is September 24th.