Bike stolen a few feet away from young owner 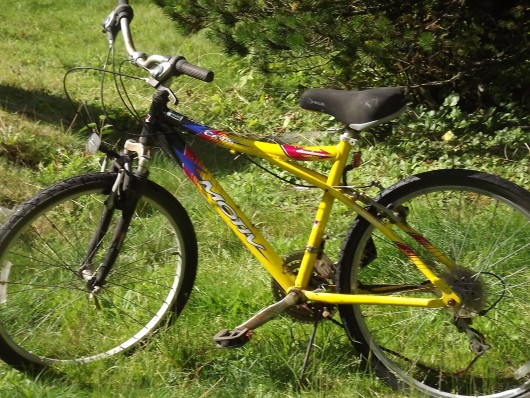 An 11-year-old girl in Ketchikan wants her bike back. It was stolen Sunday evening, and apparently is one of about 10 bicycles reported stolen in recent months.

Aviana Mitchell was outside her family’s Bear Valley home when she saw a teenage boy ride by on a bicycle. Her bike was close by, right in her front yard. She was looking the other way, when she heard a clatter.

“I ran over and my bike was gone and I saw the guy (riding) around the corner and the other bike was there,” she said.

The boy had taken Aviana’s bike, leaving the other one behind. And Aviana is not happy about it.

“I fixed it up myself, too,” she said. “I had to fix the chain and replace the tire twice. My dad let me borrow the wrench and stuff, but I had to oil the bike a little bit with DW-40. It took me a few days to earn the money to buy the tire. But, it was fixed and I’ve been riding it for a few months now and I really liked it a lot.”

Aviana did report the theft to police, but she’s not leaving it entirely up to them. She’s starting her own campaign to find her bike.

“We’ve been making posters, putting them up around town (and) checking around the creeks and stuff,” she said.

Aviana suspects that whoever stole her bicycle will end up dumping it and stealing another one when he gets an opportunity. She said police told her there have been about a dozen bicycle thefts in recent months.

Ketchikan Police Lt. Joe White said that since June 1, there have been 10 reported bike thefts within city limits. He said that number is slightly up from last year, and he has some advice for bike owners who don’t want to become part of that statistic.

“The two biggest suggestions I would have is, get your bike registered with the police department – we hand out the stickers to register them – and invest in a good lock,” he said.

White said bike thieves don’t seem to be cutting locks; they’re taking advantage of easy targets: unsecured bikes. And they do sometimes abandon them later on, which is when registering with police can come in handy.

“Because a lot of times, people call us with information of bikes left in their neighborhoods, and we go pick them up. There’s no way to find out who they belong to, and they sit down in our garage until auction time and they get auctioned off,” he said. “The stickers we have are pretty hard to get off, so every now and then we’ll recover a bike with a sticker on it, we’ll look in our files, find out who the owners is, call them up and say, ‘Hey, come get your bike.’”

White said police have brought charges against people for bike theft, but only when the owner can prove that the bike belongs to them. Bike owners also can jot down their bicycle’s serial number, which White said can be found under the crank shaft, or sometimes on the frame.

But what about bike owners like Aviana, who already had their bikes stolen? White said they can come look at all the bicycles police have recovered to see if theirs is among them.

“But she’s probably doing the right thing – just kind of keep driving around the neighborhoods and look for bikes laying in parks or ball fields, where people discard them,” he said.

Aviana wants to raise awareness, and hopes to convince the thief to give her bike back and stop stealing. She said her sister spent a lot of money on her bike, and while it’s not been stolen, it could become a target later on.

“She loves her bike and I love mine. I bet a lot of other people do, too. Please return the bikes if you’re listening,” she said. “Thank you.”

For anyone who wants to join the search, Aviana’s bike is a yellow, Motiv, 60-61 series mountain bike.

Aviana Mitchell’s bicycle was stolen Sunday from her front yard.