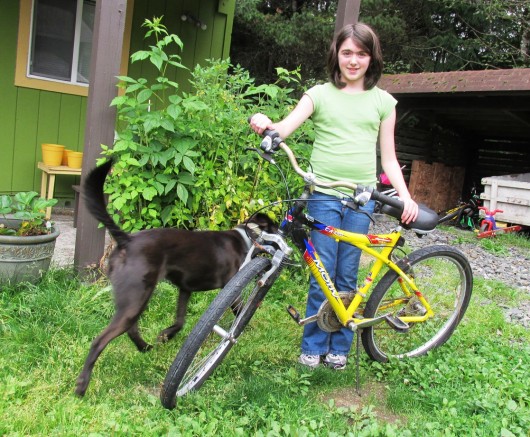 Aviana Mitchell stands with her bike, which was found and returned Thursday, just a few days after it was stolen from her front yard.

An 11-year-old Ketchikan girl whose bike was stolen on Sunday, just a few feet away from where she was standing, has her bike back.

KRBD reported on Wednesday that Aviana Mitchell’s bicycle was stolen from her front yard, when she was just a few feet away. On Thursday, the bike was discovered and returned to its young owner.

Here’s Ketchikan Police Department Officer Chris Travers: “At about 11:10, I stopped off at Safeway to pick up a sandwich for lunch and while I was waiting in line, a gentlemen passed by and said, ‘Hey officer, there’s a bike outside in the grass that matching the description of the bike that was reported missing on the KRBD website.”

The man described the bike to Officer Travers, and it did, indeed, match the description.

“I walked out to the parking lot – he described it as next to the old video store at the very edge of the Safeway parking lot in the grass next to the water,” Travers said. “I proceeded to the end of the parking lot and saw it there. As soon as I looked at it I said, “Oh, wow. That’s it. That’s definitely the bike.’”

Travers called Aviana’s mother, who happened to be out running errands, so she came and picked it up. Aviana says she was surprised when her mom got home with the bike.

“My bike was just there,” she said. “I was like, so excited. I was like, ‘Is this a dream? This must be like a dream. My bike couldn’t be back already.’ I didn’t think it would happen at all. I thought it would be gone, chopped up.”

The bike was actually a little improved from when it had been taken. Aviana says the old, torn-up seat had been replaced and one of the brakes works better than before.

Now that she has her bike back, Aviana says she plans to get it registered with the police, in case it ever goes missing again.