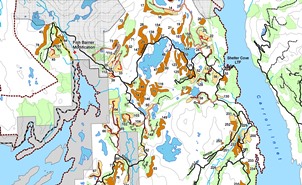 The harvest area is about 14 miles northeast of Ketchikan, in the Shelter Cove area. The proposed alternative calls for a harvest of up to 30 million board feet of old-growth timber on about 2,200 acres.

The preferred alternative, which is the one Forest Service officials at this point believe will best serve public needs, calls for harvest of up to 51 million board feet from about 2,400 acres of primarily old-growth forest.

The preferred alternative could change, depending on public input.

“While we’re working on our transition strategy over the next few years, this is one of those sales that’s fitting that bill to keep a supply of fiber coming out of the woods until the young growth is old enough to be harvestable,” said Ketchikan-Misty Fiords District Ranger Jeff DeFreest.

Young-growth, or second-growth, refers to stands of trees that already have been logged and have been growing back. The trees have to reach a certain age – at least 50 years — before they have economic value.

Conservation groups are concerned about the effects of old-growth logging on wildlife. Five groups filed lawsuits seeking to halt the recently approved Big Thorne Timber Sale on nearby Prince of Wales Island.

DeFreest said he hasn’t heard feedback yet from conservation groups about the Saddle Lake project, but it’s still early in the process.

Part of the proposal includes a right-of-way easement for the State of Alaska, which is working on a single-lane permanent public road linking Ketchikan to Shelter Cove.

DeFreest said the state plans to finish that road next year and, if all goes smoothly, that’s about when the logging project would be ready to go to bid. That road could make it a little easier for a contractor, but then again, maybe not.

“There’s a lot of factors involved with hauling logs and equipment on miles of road, and considering those various factors and who the purchaser is, there’s some variables there that I’d not want to guess at right now,” DeFreest said.

Public comment on the Draft EIS will be accepted through Oct. 27th.

Comments with Saddle Lakes Timber Sale on the subject line may be e-mailed to:
comments-alaska-tongass-ketchikan-mistyfiord@fs.fed.us

The office business hours for those submitting hand-delivered comments are 8:00 a.m. to 4:30 p.m., Monday through Friday, excluding holidays. Copies of the DEIS are available at the ranger district, and should eventually be posted online at http://www.fs.fed.us/r10/tongass/projects/projects.shtml

The DEIS was not posted as of deadline Friday.

This article has been updated from its original version to include comments from District Ranger Jeff DeFreest.

DeFreest is a member of the KRBD Board of Directors.