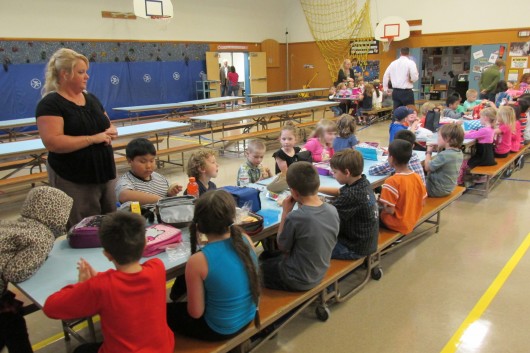 Last-minute increases in enrollment caused two Ketchikan elementary schools to scramble for additional classrooms. Both of the schools have new classrooms in place, and they’re moving closer to finalizing the new teacher contracts.

At Houghtaling Elementary, there were too many second- graders for two classrooms. So, right before school began, the school hired substitute teacher Holly Filyaw for a third second-grade classroom. That put about 20 students in each class.

Houghtaling hopes to hire Filyaw as a permanent teacher for the year. The Ketchikan School Board will decide on her contract at its September 24th meeting.

If her contract is approved, the second-graders Filyaw has been teaching will be with her for the whole year.

This Monday, the school transferred their intervention specialist, Darby Mainardi, to a new post as first grade teacher, for which she is certified. They moved half of the first-graders into her new classroom.

The two first-grade classrooms now have 14 and 13 students each, instead of 27. The School Board will decide whether to approve the extra Point Higgins classroom at its next meeting.

Superintendent Boyle says Ketchikan’s district-wide increase in student enrollment means an extra $200,000 in state funding. The two teacher contracts are budgeted at about $90,000 each. So, the extra revenue from increased enrollment will go mostly toward the two new teaching positions.