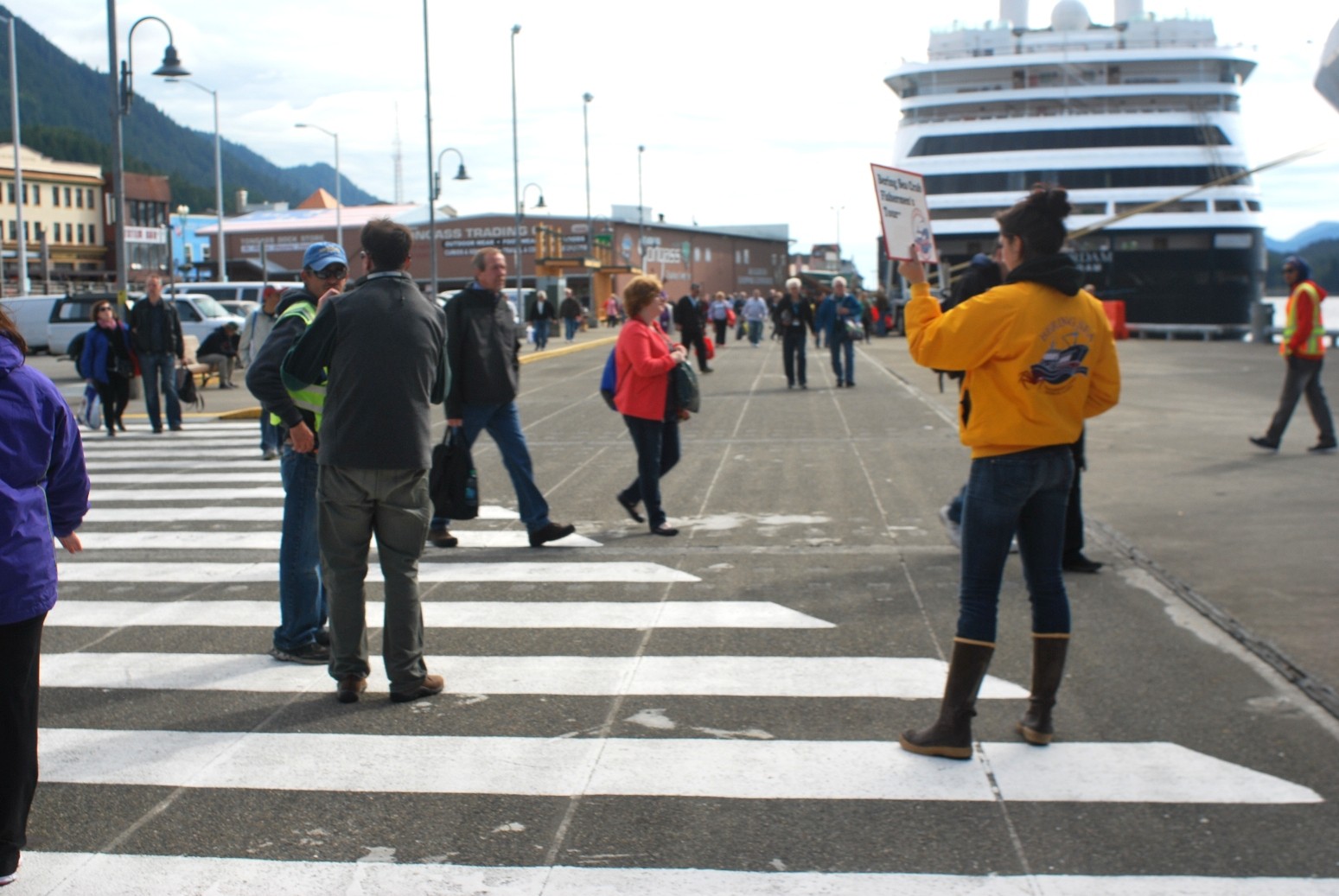 A group of downtown Ketchikan business owners is calling on local government and police to implement tighter restriction and enforcement of “hawking.”

“Hawkers” are employees of downtown businesses that stand on sidewalks or near storefronts passing out flyers, encouraging patrons inside and sometimes even physically leading visitors into stores. Port security guard Hannah Wharton sees them every day from her crossing guard post on Tongass Avenue. She said they don’t need much encouragement.

“Honestly if you just walk by and maybe look at the window for a second they’ll come up to you,” Wharton said. “That’s all it takes. If you just show any slim interest, they’ll come and get you.”

Susan Peters is the chair of the Downtown Steering Committee. She said hawkers are a problem.

“It’s bothered a lot of people for a while, and it just seems like it’s really escalated this last season,” Peters said. “It’s not what people expect when they come here. I hear complaints from visitors because they’re walking down the street they can be approached four times on one block and they’re just not expecting that in Alaska… Maybe if you go to Mexico, you expect that, because that’s how it’s done. But when you’re in Alaska, they don’t expect it.”

The city has an ordinance restricting hawkers to their business’ properties, but that doesn’t stop the practice, especially when they can legally stand under the awnings and in the doorways of storefronts.

“I think a lot of people have those doorways, number one just for the rain, but now they’re using them because they can use them,” Peters said.

Peters recently told the Ketchikan Gateway Borough Assembly that the practice might be bad for Ketchikan’s reputation, and with the role the tourist industry plays in local economy, it could be detrimental.

“I think we need to take control of it a little bit because this is a major industry for us and people don’t like that and they’ll pass it on,” Peters said. “I guess everybody’s just talking about it, and we’d like to get something done before you know it just really affects our visitor industry.”

To combat hawking, Peters suggested stricter enforcement by both the borough and the police, and from locals. She said the more complaints authorities get, the easier it will be to do something about it.

Vince Moenani, manager of Diamonds International, said stricter regulations and enforcement could be good, but their effects might be minimal.

“It’s a good thing, but nobody is scared about it. They don’t care. If somebody comes and tells them they’re not supposed to do it, they stop for a day and the second day they’re back again in the streets and doing the same thing. I think we have told them a couple of times, but it’s not helping so why should we fight against it?” Moenani said. “It looks like you’re the only ones following the law, nobody else. Nobody cares.”

Shannon Kagna is a salesperson for Milano Diamond Gallery. She sometimes hawks within the doorway of the storefront.

“I like to keep it fun, ya know,” she said. “The main thing is the people are on vacation and they want to be made to feel comfortable, not harassed, and a lot of these people, sometimes can get very pushy and I can see how that can be a turnoff.”

And visitors notice, said Lyn, who stopped by on a cruise last week from Sydney, Australia.

“We can see those in any city we visit or live. We like to get out and just chat with the people we meet in the streets or like we said, go to the library the local people,” she said. “It doesn’t make me feel uncomfortable; it’s just that I’m not interested.”

After Peters and other citizens brought the issue up at the Borough Assembly meeting, assembly member Todd Phillips said the escalation of competition is a big reason for hawking, but that shouldn’t excuse the practice.

“I think there should be zero tolerance for it because it just snowballs,” he said. “Someone sees somebody else doing it… They don’t want somebody else to have the edge. You can’t blame them – it’s a very competitive market. “

The Downtown Steering Committee suggested that the borough hire a summer ambassador to enforce the hawking rules next year. The summer ambassador would serve as a meter maid of sorts, with the power to issue citations and fines for hawking violations.

The Borough Assembly referred the issue to the Joint Cooperative Relations Committee, a collaborative effort between city and borough officials to address mutual concerns.