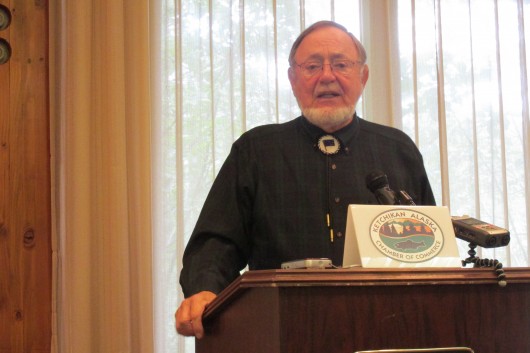 The economy and development of natural resources were on Don Young’s mind.

“Our job and your job as people is insisting those who represent you talk about real wealth, not in dollars and cents but in production, (and) the utilization of resources.”

Young congratulated Ketchikan on the recent announcement of Vigor Alaska’s contract with the state to build two new ferries, as well as the additions to the Ketchikan Medical Center. He emphasized the importance of such development, and what he sees as the biggest roadblock to economic progress.

“The No. 1 enemy, as far as I’m concerned, to American prosperity is the EPA,” he said. “They’re going to destroy the environment and not any of this is done for the environment. It’s to impede the development of resources. Remember my opening statement: Resources is the answer to this nation’s economic problems. But they will stop you everywhere you turn around.”

Young said it’s up to communities to stand up for what’s best for them.

“Every community has a challenge from outside interference that affects their well-being by a rule which they make, then you got to say, ‘no we ain’t gonna do this,’ with the state on your side. Not the DEC teaming up with the EPA,” he said.

Young also commented on the war in Syria and Iraq, saying current military operations are not effective.

“Until we change the rules of combat, I do not support troops on the ground. Until I have a guy that’s trained such as I was trained that I can retaliate if I’m fired upon without being accused of collateral damage,” he said. “The idea that they have bombing and they let them know ahead of times so that the enemy wasn’t there – this is not war; it’s patty caking.”

Young served in the army during the Korean War.

Although congressional candidates are not supposed to campaign while on official visits, Young spoke about his 42-year tenure as Alaska’s representative in the House.

“As long as I can speak for you in Congress – and they do listen – I want this job,” he said.

Young faced some controversy this year. In June, he was reprimanded by the House Ethics Committee for violating House rules regarding campaign funds and accepting gifts. He was ordered to pay nearly $60,000 back to his campaign and to donors.

There was also an instance when Young was caught on camera making faces on the House floor while another representative talked about a U.S. Marine killed in Afghanistan.

Young is known for his fiery personality, and the Ketchikan Chamber audience caught a few glimpses of it during his presentation.

“I’m one of the nicest guys around here until someone crosses me, then I’m gonna hit you with a chair,” he said.

Young is running for re-election against Democrat Forrest Dunbar and Libertarian Jim McDermott.

This month, Young has scheduled public appearances in Metlakatla, Juneau, Sitka and Anchorage.