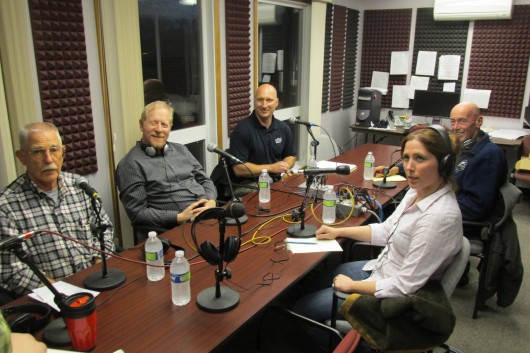 Five of the six candidates running for Ketchikan City Council participated in a two-hour forum on KRBD on Tuesday. They addressed a variety of issues, from the city-owned Ketchikan Public Utilities and ways to trim the budget; to fishing off the Stedman Street Bridge.

One big issue in the past year that inspired some of the City Council candidates to file for office is the city’s decision to change its water treatment from free chlorine to a mixture of UV light and chloramine, which is a blend of chlorine and ammonia.

Dave Kiffer currently is the borough mayor but can’t run for re-election to that seat because of term limits. So, instead, he’s running for City Council. Kiffer said he disagrees with the city’s decision to use chloramine, and added that, no matter what the city does, the federal government is going to change the rules.

“I don’t want to see us go down the road of absolutely having to build a $40 million filtration plant, so if there is another option, I’d like to hear it,” he said. “But I don’t think that whatever chemical solution we come up with is going to stand the test of time.”

Kevin Staples, who is a newcomer to local politics, said the chloramine issue is what made him start paying attention to city politics.

“When we decided to go the cheapest route possible, but yet we were giving a warning out to everybody, saying, ‘Oh, by the way if you have kidney issues or for gosh sakes if you have fish, don’t put this in the water it’s going to kill them,’ that kind of raises some red flags,” he said.

Staples said he disagrees with the decision, and with the city’s later decision to not allow the chloramine issue to be put on the city ballot for voters to consider. He would prefer filtration.

Dick Coose is running for re-election to the Council. He said the elected officials on that body made the best decision they could with the information provided.

“And maybe we need to go to filtration, maybe we don’t,” he said. “Maybe we need to do what Don Young said and just ignore the feds. Because, sometimes they’re the dictator.”

Ed Plute believes chloramine is dangerous, and said there are options for filtration systems that are less expensive than what the city has estimated.

Estimates for a full filtration system top $35 million. That’s an old estimate, though, and there are newer membrane micro-filtration systems, that have not yet been priced by the city.

Amanda Mitchell led the opposition to the chloramine treatment plan.

“I’m sure the Council really thought they were doing their best, and this is what they were told. But at what point do you start questioning the company that you’re doing business with?” she said. “And instead of questioning the company and the science, they kept handing more and more money in fighting the citizens of this town, instead of having our questions answered.”

Mitchell was referring to the city paying consultants CH2MHill to help counter some of the information that the anti-chloramine group was providing.

Also during the forum, the five candidates talked about the hospital expansion project, the two bond propositions that will be on the city ballot, whether the decision to raise sales taxes was the right choice and whether the city should consider handing operational control of the Swan Lake hydroelectric dam over to the Southeast Alaska Power Agency.

Incumbent City Council Member KJ Harris also is running for one of the three Ketchikan City Council seats. He was unable to attend Tuesday’s forum. The local election is next Tuesday, October 7.

To listen to those discussions and more, the full forum is posted below. Our apologies for cutting off the introductory statements – we didn’t start recording as quickly as we should have.